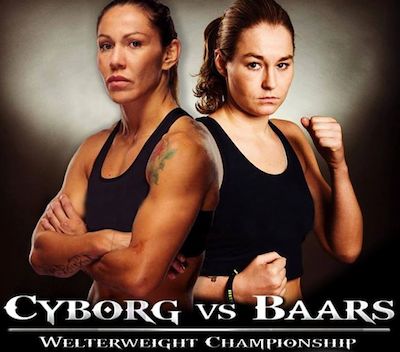 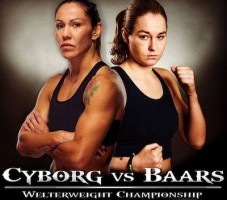 Baars started off strong, using her jab and dropping Cyborg on multiple occasions using kicks and knees. As Baars began to slow down in later rounds, Cyborg lived up to her name and just kept coming, landing big shots, muscling Baars in the clinch and throwing her to the ground many times throughout the bout.

In the end, Baars was awarded the victory and indeed showed how technique can trump power. Cyborg posted the following statement on her Facebook page shortly after the bout:

“Logical And everyone gets sad when he loses! But I love my job, I love to fight the fight took jorinas I do not choose opponent. I’m ready for any battle! Victory and defeat is consequence! Certainly learned a lot from that fight. So I have to thank God and all my fans who support me. I can not control victory or defeat but I can try to make the best fight of the night! ;) Godpower #thankyou #fans #sponsor”

Props to Cyborg for staying busy outside MMA, expanding her horizons and being willing to fight such a high caliber opponent.

How will this loss affect Cyborg’s fighting future in MMA? It probably won’t. The UFC has said she needs to prove she can make 135 pounds and win some fights there before they consider signing her anyway. She’s still the Invicta FC bantamweight champ. And Muay Thai is a completely different game.

The loss to Baars could provide Cyborg’s future opponents footage to study regarding some holes in her striking. The problem is, there are very few MMA opponents she could face with as high caliber a striking game as Baars, and if Cyborg gets her opponent to the ground in MMA, then they’re going to have to deal with that ground and pound.

No statement yet from Ronda Rousey on what she thought about the fight.

And if you still haven’t seen it, it is one of the best female fights you will likely ever see. Check it out.
[ads1]
[ads2]