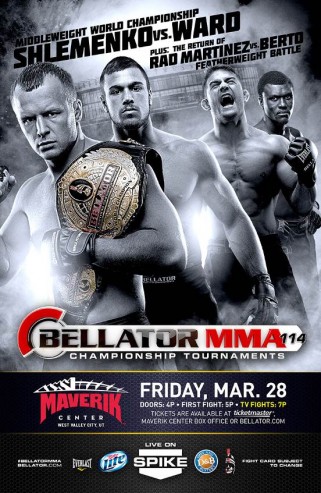 Bellator 114 goes down tonight at Maverik Center in West Valley, Utah. The main card airs on Spike TV at 9 p.m. ET and you can watch the prelims above starting at 7 p.m. ET. The undercard will featured Rad Martinez, Bubba Jenkins, Ron Keslar and more in the seven fight showing.

On the main card you will get to see Alexander Schlemenko defend his middleweight title against tournament winner Brennan Ward. There will also be two featherweight tournament fights and a middleweight semifinal.

Here is what is on tap tonight from Utah.