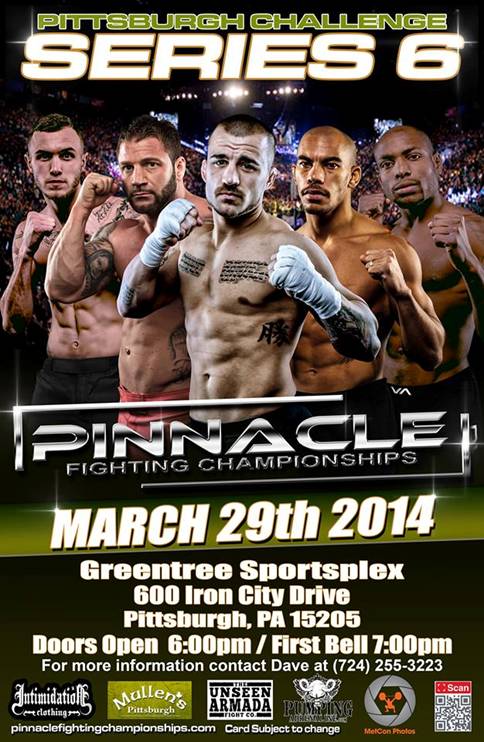 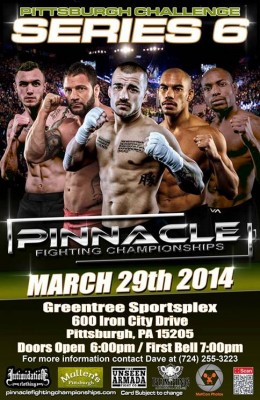 Pinnacle Fighting Championships returns to Pittsburgh on March 29, 2014 with its biggest show to date, Pittsburgh Challenge Series 6. And for the first time in organizational history, the event will be available via Internet Pay-Per-View. The event will be broadcast on StandThemUp.org for a price of $14.99.

The blockbuster mixed martial arts card is set to be headlined by a bout between top featherweight prospects Mark “The Pride of Bloomfield” Cherico and Brady “The Alpha Male” Hovermale. The fight card also features four other professional bouts and seven amateur bouts, including three title bouts.

Fighting once again in his hometown, Cherico (5-0 / fighting out of Pittsburgh, PA) looks to keep his overall unbeaten record of 14-0 intact. Coming off of back-to-back wins over UFC veteran Donny Walker and Strikeforce veteran Billy Vaughan in PFC action, the Fight Club Pittsburgh leader has his eyes firmly set on the UFC. Along with training at his home base for this fight, Cherico has branched out to train at various American Top Team locations in Florida, stemming from his relationship with manager and UFC veteran Charles McCarthy.

Hovermale (9-3 / fighting out of Upland, IN) will be Cherico’s toughest test to date. Riding a four-fight winning streak, he has finished all nine of his victories without the need of the judges. The 22-year-old is no stranger to facing top competition, and he has been training in California for this bout at the famed Team Alpha Male camp that has produced many top UFC fighters, including Urijah Faber, Chad Mendes, Joseph Benavidez, and more.

In the night’s co-main event, Joey “The Hitman” Holt (3-1 / fighting out of E. Liverpool, OH) returns looking to bounce back from his first career loss to Julian Lane at PinnacleFC 5 in November. The Bellator MMA veteran will take on fellow Bellator MMA veteran Rob Hanna (3-0 / fighting out Dayton, OH) in a lightweight battle. Both fighters picked up victories under the Bellator banner, as Holt knocked out Clint Musser with a flying knee at Bellator 51, and Hanna earned a decision victory over Rocky Edwards at Bellator 78.

At 145 pounds, Fight Club Pittsburgh product Khama “The Death Star” Worthy (4-2 / fighting out of Pittsburgh, PA) looks to extend his three-fight winning streak when he faces unbeaten Michigan native Jacob Butler (2-1 / fighting out of Baldwin, MI). Both fighters have proved to have massive firepower and will look for the knockout finish.

A pair of fast-rising featherweights will square off in a highly anticipated bout, as Mad Dog Gym’s Francis Healy (2-1 / fighting out of Pittsburgh, PA) will take on the ultra-hot Chris “Kid Dynamite” Dunn (7-3 / fighting out of Cincinnati, OH). Dunn is riding a five-fight winning streak with five stoppages since losing to Cherico at the inaugural PinnacleFC event in December 2012. Healy is also coming off of a win, as he stopped Jeff Smith with an armbar in the first round in the best performance of his career in December.

And in the night’s final professional bout, New York product Phil Parrish (2-1 / fighting out of Corning, New York) will take on Mike “Too Pretty” Putnam (1-0 / fighting out of State College, PA) in a lightweight bout. Both fighters put on perhaps their career-best performances in their last outings in the PinnacleFC cage. Parrish upset Jake Schilling with a first-round knockout at PinnacleFC 3, while Putnam was successful in his pro debut with a victory over Josh Hilliard at PinnacleFC 4.

The event and live stream will be produced by E2A productions, with executive producer Michael Moran running the show. Moran has produced many of the top local MMA organizations, and his work has been seen on GoFightLive.tv, Comcast, and more. In-cage announcer George Phillips will be the night’s emcee, while veteran broadcaster Ryan Cavanaugh will call the in-fight play-by-play action. Cavanaugh will be joined in the broadcast booth by veteran MMA writer David McKinney and professional fighter and PinnacleFC veteran Kyle “Kyote” Rozewski.

Tickets for PinnacleFC 6 start at just $35 and are available now at www.cagetix.com. Pittsburgh Challenge Series 6 takes place at the Greentree Sportsplex in Pittsburgh, Pennsylvania on March 29. For more information, visit www.pinnaclefightingchampionships.com.