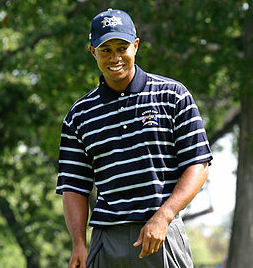 On Friday, March 7, Tiger Woods sunk this incredible 91-foot birdie putt on the par 3 fourth hole at Doral in the second round of the WGC – Cadillac Championship.

Technically, it was 91 feet, 7 inches but who’s counting. It’s the longest putt of the last three years on the PGA tour.

As remarkable as that putt was, it’s still not the longest of Tiger’s career. The 38-year-old Woods actually sunk a 123-foot, 6-inch putt back in 2001 at the Tour Championship in Houston.

Did you know: The longest putt on record is 375-feet, by a guy named Fergus Muir, who  at the ripe age of 66 used a hickory shaft putter to tee-off with.