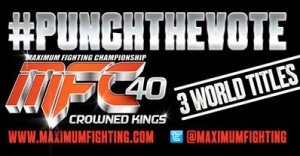 For the second time in the history of the Maximum Fighting Championship, fans will get to pick the true main event of fight card featuring three title bouts.

The MFC’s #PunchTheVote campaign launches on Tuesday, March 4 and will run till 11:59 p.m. on Friday, May 2, allowing fans to register their pick between three title fights with the top vote-getter receiving main-event billing at MFC 40: Crowned Kings on Friday, May 9.

Airing live on AXS TV Fights from the Shaw Conference Centre in Edmonton, Alberta, MFC 40 boasts a trio of main-event worthy bouts, all with MFC championship belts on the line including the first defense by bantamweight champion Anthony Birchak, who won the inaugural #PunchTheVote campaign at MFC 38.

“The MFC continues to be a front-runner when it comes to creativity, and #PunchTheVote was such a huge success that we had to bring it back,” said Mark Pavelich, Owner/President of the Maximum Fighting Championship.

“We love getting the fans involved because we are one of the only organizations in any sport that truly values the opinions of its fans. The fans have been incredibly loyal to the MFC and this is one way we can pay them back. It is our responsibility to bring the fans great fights and we want the fans’ perspective on who deserves to be the main event.”

The three fights MFC fans will get to vote for are:

*Birchak won the title at MFC 38 and was part of Sports Illustrated 2013 Photos of the Year. Croom enters the MFC on a nine-fight winning streak including seven first-round finishes.

*This is a much-anticipated rematch following their fight at MFC 39 that Gallicchio won via second-round submission. The two have combined for 19 submission victories.

*Alvey, who has won four of his last five fights, makes the first title defense of his title he won at MFC 38 with a fifth-round TKO. Swofford boasts seven first-round wins – six of those coming by knockout.

MFC’s Twitter page (@maximumfighting) – vote must contain all three hashtags to qualify including the championship fight you want to see as the main event.

Tickets for MFC 40: Crowned Kings are available at www.ticketmaster.ca and by calling the MFC Ticket Hotline at (780) 504-2024.