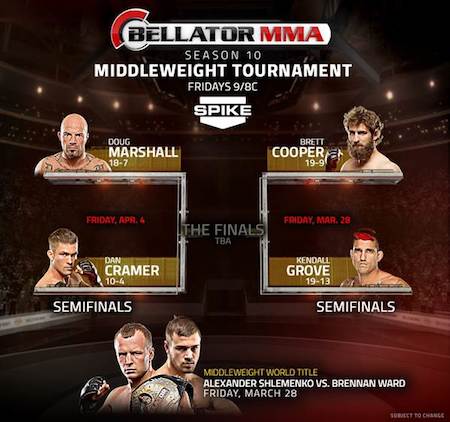 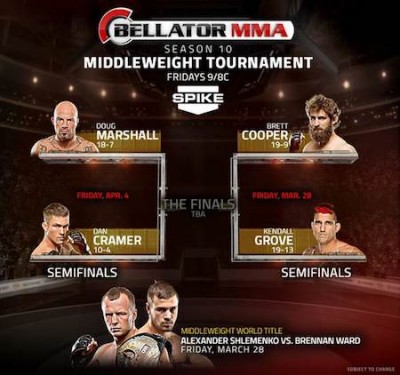 Bellator will kick off their Season 10 middleweight tournament beginning March 28 from Utah’s Maverick Center as Brett Cooper battles Kendall “Da Spyder” Grove in the semifinals. And on April 4, Season 8 winner Doug “The Rhino” Marshall takes on American Top Team’s Dan “Cosmo” Cramer in the other semifinal match-up from the Reno Events Center.

Both fights will be featured on the main card of Bellator 114 and 115 respectively, and will air live on Spike TV.

Cooper is coming off a unanimous decision loss to reigning Bellator Middleweight Champion Alexander Shlemenko in September of last year, while Grove will be making his first run through the Bellator tournament after a successful promotional debut against Joe Vedepo in October.

“Grove is a tough customer but I’m going to put him away,” Cooper said. “I really am pulling for Marshall in the other side of the bracket, so I can smash his face in the finals. And after that, the Russian has it coming too. I’m not looking past anybody in this tournament, it’s full of tough, skilled guys but whoever is in my way to the title is getting two basic food groups: leather and canvas.”

“I’m very excited to be a part of the next Bellator Middleweight Tournament,” Grove said. “These tournaments are an awesome way to fight the best guys in the division quickly and get that title shot. Cooper is a tough guy, but I’ll be ready on March 28th.”

This will be Marshall’s second shot at the middleweight tournament after winning Season 8 with victories over Andreas Spang, and Sultan Aliev, and knocking out Brett Cooper in the finals. After earning the title shot against Shlemenko, “The Rhino” faltered, suffering a first round KO to the body (he also tested positive for a banned substance).

Cramer, a nine-fight Bellator vet, made it to the semifinals of the Season 8 tournament but suffered a third round TKO to Brett Cooper.

“The Rhino will be running through guys with brutal KO’s and giving the fans a show,” Marshall said. “I want to prove that my fight against Shlemenko was a fluke, and I’m ready to make another run through that tournament and get another title shot.”

“I am really excited to get back into the tournament,” Cramer said. “It is going to be an exciting fight and Doug and I are both sluggers. This is going to be a tough fight for both of us and will come down to who wants it more. ”