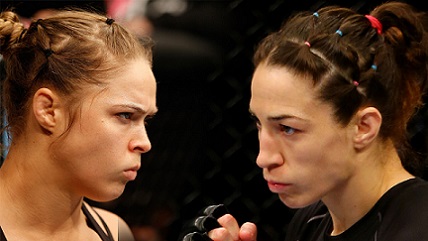 Yes it is that time again. Time for the beautiful minds behind ProMMAnow.com to assemble and give you our best assessment for UFC 170 that takes place tomorrow night in Las Vegas and will air live on UFC Fight Pass, FOX Sports 1 and pay per view. This event has, on paper, some big mismatches but intriguing match ups.

We will have you covered with play by play and post fight recaps all night so stay locked in. Before that though, here are our staff picks.

Jason Kindschy -This is a really tight matchup in my humble opinion. Both Davis and Eye tout well-rounded skill sets and have been victorious against top ten opposition. Davis claims the grappling and experience edge, while Eye has striking and strength advantage.  Davis is the favorite here but I am going with the upset with Eye taking the decision win. Pick – Jessica Eye via Decision.

Gary Thomas–  Quietly Alexis Davis has positioned herself as a contender. Not alot of talk and not much attention on her so no pressure for Davis. Eye has been in the middle of personal and professional turmoil but is always game. I think that Eye channels all of this energy into a huge performance. I think “Evil” prevails in this one. Pick – Jessica Eye via Decision

Jason Kindschy – I love this fight simply because I expect a war. “Wonderboy” is the favorite but the Aussie Whittaker is a true scrapper and I believe that grinding style poses problems for Thompson as Matt Brown showed us in 2012. Look for Thompson to get going early, landing flashy and crisp technique, but when he can’t finish Whittaker early, look for the Aussie to pick up the pace. I see this fight going to the judges with Robert Whittaker taking two of three rounds for the victory. Pick – Robert Whittaker via Decision

Gary Thomas – Whittaker has the toughness to handle 15 minutes with Thompson. The difference will be the striking and I believe that “Wonderboy” employs some stand-up that will finish off Whittaker. Pick – Stephen Thompson by TKO Round 2

Jack Bratcher – Two karate black belts face off in this one.  TUF Smashes winner Whittaker is coming off a loss to Court McGee, while Thompson has won his last two over Chris Clements and Nah-Shon Burrell. Whittaker does have a win over TUF winner Colton Smith, but in the end I like Thompson to take this one, either by TKO or decision. Pick – Stephen Thompson by (T)KO

Jason Kindschy – I’m really hoping that Mike Pyle gets back on track with a big win over Waldburger. He has all the necessary abilities to be a top contender at 170 and I think if he makes a statement on Saturday, he will be back in the running. Waldburger is no easy match for most in the UFC right now, but I think Pyle has all the tools needed to beat most of the top ten. I expect Pyle to outwork T.J. and get the submission after the halfway point of this tilt. Pick – Mike Pyle via Submission Round 2

Gary Thomas- Mike Pyle is that guy that just wins. Yeah he loses too but when it matters, he wins. I think approaching a contract negotiation as well as coming off a loss he takes it to Waldburger. Pick – Mike Pyle via KO Round 1

Jack Bratcher:  Pyle was on a nice tear before getting KO’d by Matt Brown. Waldburger has been up and down against lesser talent. Both guys have a great submission game, but I think Pyle has the stand-up advantage. Pick – Mike Pyle via (T)KO.

Jason Kindschy – Demian has done great since dropping to 170 aside from the controversial loss to Shields back in October. We all know Rory is one of the best at welterweight and prior to his loss to Lawler, most would agree he is a future champion. That being said, I think MacDonald wins this fight in all areas. Maia is a wizard on the mat but I don’t see him being able to put Rory in danger without taking serious damage himself. I’m not sure if Rory will be able to finish Demian, but I anticipate a faster and more technical MacDonald to beat Maia up for 3 rounds. Pick – Rory MacDonald via Decision.

Gary Thomas – Anyone else wanna see Rory MacDonald just come out and throw hands to put Demian Maia away? I do. My hopes are that Rory is stress free with no GSP around and shows that fierceness that he has inside. Maia is a great guy but I don’t see this getting into a technical ground battle so he is at a disadvantage. Pick – Rory MacDonald via (T)KO Round 3.

Jack Bratcher – Maia could pull off a submission, but I see Rory using his striking and wrestling to beat Maia up and do what Rory does best, make good fighters look bad. Pick – Rory MacDonald by Decision or (TKO).

Jason Kindschy – Patrick Cummins sure knows how to promote a fight. Regardless if there is any truth behind his claim of making Cormier cry in wrestling practice, he is playing physiological warfare. Cummins boasts an impressive record and has the wrestling credentials to match Cormier, but with just 10 days notice opposed to Cormier preparing for 10 weeks, I don’t see Cummins getting the job done. Anything can happen in this crazy world of MMA and as we all know, crazier things have happened. I just feel preparation and caliber of opponents favors Cormier immensely and that’s the determining factor here. Pick – Daniel Cormier via (T)KO.

Gary Thomas: Where’s my coffee? That would be an epic post fight question posed by Cormier after he beats Cummins by any way he wants. Pick – Daniel Cormier via (T)KO, Submission and Decision after Round 2.

Jack Bratcher: Cummins may be in Cormier’s head a bit, but I doubt it. I think it’s just pissing him off. Cormier wins this one all day long. Puhhhlllleeeeeeze

Jason Kindschy – Good golly Miss Molly, this ought to be awesome. Unprecedented in MMA as two undefeated Olympic medalists put it all on the line for the chance to be the queen of femme fatale’s. Many think that McMann’s wrestling will pose big problems for Rousey, but I am still a firm believer that the highest level Judo beats most styles. However, I do feel that McMann is the strongest opponent Ronda has faced and the work ethic of these two is very close. I also believe that Rousey has more ways to win this fight whereas McMann has to get the takedown and look for a finish on top, which will likely prove to be a difficult task. All things considered, I see a battle where we see two great grapplers striking and then the more dominant fighter gets the finish on the ground in the later rounds following some lively exchanges. I’ve gotta go with the champ Rousey to get the job done, with yet another arm bar in the third or fourth round. Pick – Ronda Rousey via Submission (Armbar)

Gary Thomas: For Rousey vs. McMann it should come down to skill and will. Not skill over will, just skill and will. McMann has the will and has trained at elite levels since her days as an Olympian. That won’t be enough to set her apart from the champion in this fight. McMann will bring the will but Rousey will have the skill to go along with it. McMann is tough enough to make it competitive for a few rounds but as we’ve seen, no one gets out without losing an arm. Pick – Rousey via Armbar Round 4

Jack Bratcher: Supposedly Ronda’s striking is something to behold. Hopefully we’ll get to see some of that in this fight. One thing we don’t see her do is throw kicks, and maybe that’s because her knees aren’t so great. Not sure. Anyway, if I was McMann I’d be aiming for her legs with kicks a lot. But what do I know. It’s going to be interesting to see if Ronda can take McMann down or vice-versa. In the end I think Ronda has more ways to win and until someone proves otherwise I have to pick her to win via arm bar. Maybe in the second or third round. Pick – Ronda Rousey via Armbar.