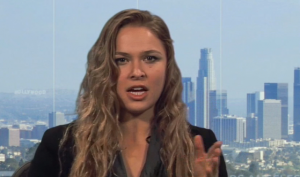 Asked why she will win Saturday’s UFC 170 main event against Sara McMann, UFC women’s bantamweight champ Ronda Rousey tells ESPN, “Because I’m the most dangerous unarmed woman on the planet, that’s why.”

It’s Olympic judo medalist vs. Olympic wrestling medalist and Ronda comments on their clash of styles. “It’s yet to be seen how her style of wrestling will match-up against my style of judo in an MMA setting,” she says. “That’s why this fight is so exciting because there are so many unknowns.”

Rousey also discusses how she got the nickname “Rowdy” and why she likes playing the heel role. She also explains how she feels about the quick turnaround time between her last fight and this one and how she thinks it will affect her performance come fight night.

2 thoughts on “Ronda Rousey: ‘I’m the most dangerous unarmed woman on the planet’”