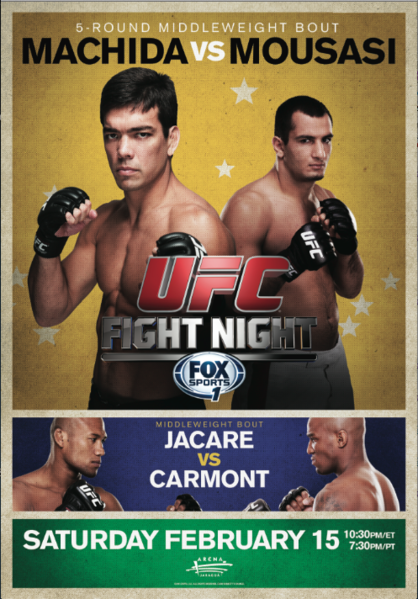 The UFC Fight Night 36 event is set to take place on Saturday, February 15, in Jaraguá do Sul, Brazil. The event will be headlined by the middleweight bout between former UFC light heavyweight champion Lyoto Machida and former Strikeforce light heavyweight champion Gegard Mousasi. The co-main event will feature another middleweight bout between Ronaldo “Jacare” Souza and Francis Carmont.

The event doesn’t feature a title bout but does have a couple of bouts with title implications. Let’s get into the three huge questions going into the event:

Will the main event be a boring fight between two fighters that like to counter-strike?

There are a lot of fans and media that are really looking forward to the UFC Fight Night 36 main event between Lyoto Machida and Gegard Mousasi. I think the bout could be exciting if both fighters come to fight, but something about their styles just doesn’t scream excitement in my opinion. We’ve seen both fighters be really cautious in the past(and that’s fine), but if the fight consists of a bunch of feints and circling without much action on the feet it could be a dud. I think both fighters realize that the winner of this bout will likely get a title shot, so either they’ll put it all on the line and try to win impressively or fight really cautious to make sure they get the win. The latter could prevent them from getting the title shot if Ronaldo “Jacare” Souza really impresses in the co-main event.

Could Ronaldo “Jacare” Souza leap frog the winner of Machida/Mousasi with an impressive win to get the next title shot?

Souza has won both of his UFC fights since coming over from Strikeforce with both fights ending with finishes in the first round. Altogether, Souza has won five consecutive fights since his last loss and has finished every single one of those opponents. He’ll be facing a fighter in Francis Carmont who has also won 11 consecutive fights, including six straight fights in the UFC. If Machida/Mousasi is deemed boring by UFC brass, I wonder if Jacare winning impressively is enough to the title shot?

Can Charles Oliveira regain form and get back in the win column against Andy Ogle?

Oliveira is one of the most talented fighters in the UFC and is coming off back-to-back losses in the UFC. Those two losses were against Frankie Edgar and Cub Swanson, two top 10 featherweight fighters. Oliveira is only 24 years old and has the tools to make a title run as he matures, but he’ll be facing the scrappy Andy Ogle on Saturday night. Ogle is (1-2) in the UFC after appearing on “The Ultimate Fighter”, and a win over Oliveira would certainly boost his stock. However, if Oliveira is able to get back on track, he could be a force to reckon with for most of the featherweights out there.

It should be an exciting night of fights with several fighters on the preliminary portion of the card trying to make a name for themselves. Be sure to stay tuned to ProMMAnow.com for more UFC Fight Night 36 news and coverage this week.