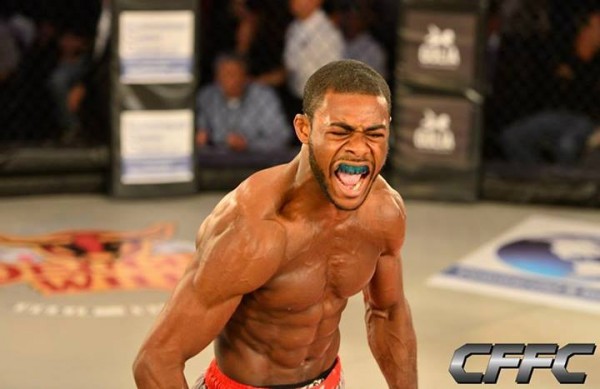 After an injury forced Bryan Caraway out of his bout against Lucas Martins scheduled for Feb. 22 at UFC 170, the UFC went in search of a bantamweight that could fill the slot on roughly three weeks notice. In steps undefeated 24-year-old New Yorker and Serra-Longo fighter, Aljamain “Funk Master” Sterling (8-0).

Sterling last fought back in November when he retained his Cage Fury Fighting Championships (CFFC) Bantamweight Title with a first round submission of Joel Roberts, making it his fourth win by submission. He also has one win by knockout and three by submission on his record.

Mr. Sterling was kind enough to answer a few of our questions this week so you fight fans could get familiar with the UFC’s newest addition to their 135-pound roster.

PRO MMA NOW: How did you get the nickname “Funk Master” and who gave it to you?

ALJAMAIN STERLING: My nickname started through wrestling in college. I was a big Ben Askren fan and I tried to recreate all his crazy scrambles and I started to get really good at scrambling and hitting “Funk” rolls in practice and in matches. My teammates would always say I was really funky, or that they hated wrestling me because I always did weird stuff that shouldn’t work. I wanted a set nickname for my pro career, and Funky was already taken by Askren. So I came up with Funk Master, ran it by my brother that wrestled, and he liked it. Since then it kinda just stuck.

PRO MMA NOW: What got you into this MMA thing?

ALJAMAIN STERLING: I got into MMA because I still had the fire to compete. After wrestling was over, I came up short of my goals, which was becoming a National Champ. Going out with a 6th place finish, just didn’t sit right with me. I already fought as an amateur and did well, so I decided I was ready to make the jump into the pro scene, and I haven’t looked back since.

PRO MMA NOW: How long have you been with Team Serra-Longo and what weight class would Matt Serra fight at if he had to weigh-in right now?

ALJAMAIN STERLING: I came down to Long Island before I officially made up my mind that I wanted to live back home, and check out a couple of the top gym’s down there, and Serra-Longo just made the most sense, not to mention they were nothing short of welcoming when I came down. It’s been about 10-11 months now, from the first time I walked through their gym doors. And as for Serra’s weight class, I wont comment on that. Next thing you know I’m his demo dummy for the next few weeks!

PRO MMA NOW: I was looking at your Twitter timeline and someone had asked you if you’d heard from the UFC yet on Jan. 27. You said no not yet. Then your next tweet, the same day, said you “almost lost your voice screaming just now”. Tell me about that phone call when you first found out and the emotions you felt.

ALJAMAIN STERLING: Ahh man, I was overwhelmed! I said, “Hell yeah! Let’s do it!” before even asking who the opponent was. After I was told the opponent I was still sporadically saying, “Let’s do it! Let’s do it!” on the phone. I thought about all the times I said I’ll be a UFC champ, and that call almost felt like I was dreaming! I was on cloud nine…and soon it’ll be show time!

PRO MMA NOW: You last fought in November, defeating Joel Roberts via submission. Were you training for a fight when you got the call from the UFC and will these three weeks be enough time for you to adequately prepare for your Octagon debut?

ALJAMAIN STERLING: Yea, over at Serra-Longo’s, its like an unwritten rule to always train, and always be ready. You fight, you let your body heal, and you’re back to work. Don’t gotta go 100% with the training, but you’re doing something to keep in decent shape. I was training for a 5 round fight, then the fight got scratched and pushed back a week. Then that fight was pushed back to March 22, so it was a little discouraging because I was sparring more rounds, and then had to take a break so I didn’t beat my body up too much. So it worked out perfect, I took a few days off that one week, but my cardio will be ready to go nuts come fight night!

PRO MMA NOW: Give us the scouting report on Lucas Martins. What are your thoughts on him and how do you see this one playing out?

ALJAMAIN STERLING: The most I can say about Mr. Martins is, that he has a good chin, he looks tough, and he will come to fight. February 22, we’ll battle to see who’s leaving the better man, and who’ll be getting paid in full. I wanna be the best of my time, and to do that I gotta beat tough guys, who are just as hungry as me, and I’m glad I get to leave with a paycheck, doing what I love to do….COMPETE!

PRO MMA NOW: What is one thing about Aljamain Sterling that fight fans might be surprised to learn?

ALJAMAIN STERLING: I think they’d be surprised to know that I can make a mean batch of chocolate lava cakes from scratch!

PRO MMA NOW: I’d love to try some! Thanks for your time, Aljamain! Best of luck at UFC 170 and hope to catch up with you down the road.

ALJAMAIN STERLING: Thank you for time too, and follow the Funk at @FunkMasterAljo.

Check out this highlight reel of “The Funk Master” in action: