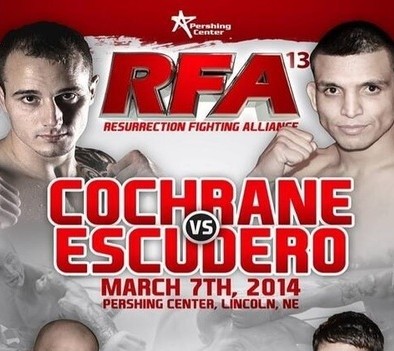 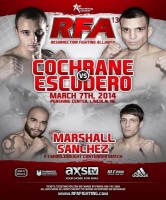 Resurrection Fighting Alliance (RFA) president Ed Soares announced today that the promotion will be returning to the “Cornhusker State” of Nebraska. RFA 13 – Cochrane vs. Escudero will feature a main event between two former RFA headliners as Nebraska’s own Dakota Cochrane faces The Ultimate Fighter 8 champion Efrain Escudero on Friday, March 7th at the Pershing Center in Lincoln, Nebraska. The entire main card will be televised live and nationwide on AXS TV at 10 p.m. ET / 7 p.m. PT.

“I’m looking forward to returning to Nebraska with RFA 13 – Cochrane vs. Escudero,” stated Soares. “Dakota Cochrane and Efrain Escudero are two very experienced fighters that have both headlined RFA shows. I expect them to deliver another exciting main event on March 7th.”

Tickets for RFA 13 – Cochrane vs. Escudero are available for purchase NOW through www.Ticketmaster.com or by calling 800-745-3000. Tickets start at $20, Special 8-Seat VIP Table Packages start at $400, and a Student or Military ID will receive an additional $3 discount.

Cochrane (15-5) is one of the most popular fighters in the state of Nebraska and the RFA. He made his debut for the promotion at RFA 1 and went on to compete for the promotion in five of its first six shows. In 2012, the lightweight was also a participant on the fifteenth season of the UFC’s hit reality show The Ultimate Fighter. Now living in Omaha, Nebraska and fighting out of Premier Combat Center, Cochrane is excited about returning to the promotion that helped kick-start his career.

“I’m really excited about this fight. It’s always a pleasure fighting for the RFA and this will be the first time I’ll be fighting in my state’s capital city. I will have a lot of friends and family supporting me in Lincoln,” Cochrane explained. “Efrain Escudero is a really tough opponent. I think it’s either going to have an exciting finish in the first round or it will go all three. That seems to be the way most of my fights go.”

Escudero (21-7) will be looking to crash Cochrane’s homecoming as he heads into enemy territory. Escudero is best known as the lightweight winner of the eighth season of The Ultimate Fighter and competing for the UFC seven times. However, he like Cochrane, has also headlined an RFA event and is eager to extend his three-fight win streak on Match 7th. Training alongside former UFC lightweight champion Benson Henderson at The MMA Lab in Glendale, Arizona, Escudero is ready to show the world he is still one of MMA’s top lightweights in his return to the RFA.

“It feels great to fight for the RFA again. They have always been really nice to me,” stated Escudero. “Dakota Cochrane is a great athlete and good opponent. That’s why I took this fight. I’m not the kind of person that is looking for easy fights to pad my record. I think he’s very strong and aggressive, but I see some holes in his game that I’m going to capitalize on.”

The co-main event of RFA 13 has an equally exciting fight with an added layer of intrigue. Fresh off of dominating first round stoppages in their RFA debuts, Lincoln’s hometown favorite Miles “Beast Mode” Marshall (3-1) squares off with St. Louis native Andrew “El Dirte” Sanchez (4-1) in a #1 contender’s bout at 185-pounds. The winner will face “King” Kevin Casey for the RFA middleweight title, after Casey dominated UFC vet Eddie Sanchez with a first round stoppage on Friday night at RFA 12 in Los Angeles.

Marshall was recently ranked as one of the Top 10 middleweight prospects in the sport by MMASun.com and there is no wonder why. After compiling a staggering 22-2 record in amateur MMA, Lincoln’s favorite son continued his onslaught on the pro ranks. Possessing an extremely fan friendly fighting style and brutal punching power a la Wanderlei Silva, the Longoria’s Black Belt Academy standout was also a junior college wrestler at RCTC in Rochester, Minnesota. Marshall is now excited to fight fellow top middleweight MMA prospect Sanchez in his hometown with a shot at the RFA middleweight title on the line.

“This is huge. The fact that the RFA is having this fight is in my hometown is going to motivate me even more to put on a great show. Sanchez is an excellent wrestler, but this isn’t wrestling. It’s cage fighting,” stated Marshall. “I’m interested in seeing what he does when I start throwing bombs. I’m throwing heat, getting the win, and coming for that belt.”

Standing in his way and looking to shock the hometown crowd is Sanchez, who is a fellow Top 10 ranked middleweight prospect via MMASun.com. Sanchez made a name for himself in the wrestling world before entering professional MMA. Wrestling at McKendree University in Lebanon, Illinois, which is located in the the Greater St. Louis area, Sanchez became a four-time NAIA All-American, two-time National Champion, and was voted the 2011 Wrestler of the Year. This past April, Sanchez also won the Purple Belt medium-heavyweight division at the IBJJF – Pan Jiu-Jitsu Championship. The Finney’s MMA standout is now focused on getting by Marshall and securing a title shot.

“I feel like I’m finally on the right track now that I’m with the RFA. I’m going to win this fight and come for that RFA title,” stated Sanchez. “I think Miles Marshall is a very dangerous opponent with heavy hands and powerful kicks, but he’s wild and over-aggressive which is a sign of inexperience. His only chance is landing a big punch, but that’s not going to happen. He knows I’m going to take him down to finish the fight, but he won’t be able to stop it.”

The main card of RFA 13 will also feature a pair of top ranked welterweights, as RFA fan favorite Chidi “Chidi Bang Bang” Njokuani (10-4) returns to the 170-pound division after a brief stint at middleweight in his last RFA appearance. He will face recent RFA signee and regional champion Chris “Stump” Heatherly (7-1) in a featured welterweight contest.

Also returning to the RFA at this event, after making successful debut appearances, will be featherweight Dan “Hitman” Moret (6-0) and lightweight T.J. “Carnivore” Hepburn (2-0). They will be facing fellow unbeaten prospects on the main card. Moret will welcome Strikeforce vet Luke Sanders (6-0) and Hepburn will lock horns with local standout Ryan Shell (5-0).

The main televised card will get started with a lightweight contest between TUF 15 alum Cody Pfister (10-3-1) and Zach Juusola (10-2), who was a college wrestling teammate of RFA 13’s co-headliner Miles Marshall while the two attended RCTC.

The entire main card of RFA 13 – Cochrane vs. Escudero will be televised live on AXS TV starting at 10:00 p.m. ET / 7:00 p.m. PT on Friday, March 7th. RFA 13 will be the promotion’s fifth event in Nebraska and the first in the state’s capital city of Lincoln. More fights on the RFA 13 preliminary card will be announced soon.

Please visit RFAfighting.com for bout updates and information. RFA is also on Facebook at Facebook.com/RFAfighting and Twitter at @RFAfighting.