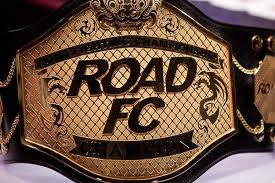 January 18, 2014 – ROAD Fighting Championship held ROAD FC – KOREA 001, the first of a series of monthly league events at the Grand Hilton Convention Centre in Seoul, South Korea today. The six matches held under the Young Guns 10 banner showed the exciting future of Korean MMA fighters, as half of the fights ended by KO in the first round, and the other half were fought to decision. All of the fights on the Main Event ended in thrilling finishes – the judges had a very easy night!

Riki Fukuda had a successful debut in ROAD FC with a very good boxing game against Kim Hee-Seung. The sold-out home crowd of 2,000 was in Kim’s favor as he traded punches with the famous Japanese fighter. Fukuda was able to bring Kim to the canvas in the second round where he took the back and pounded to get a referee stoppage. Fukuda was very respectful when he addressed the audience after his hand was raised in victory,

“I really appreciate my opponent because he waited to fight with me. The match was supposed to happen in October but I was injured so it was cancelled.”

Fukuda was asked who he would like to fight next,

“Any middleweight fighter in ROAD FC, a strong fighter. I just want to fight and become the Champion.”

Kwon A-Sol made a very tough “welcome to the ROAD FC MMA cage” to Mostafa Abdollahi, a Muay Thai Champion. Abdollahi’s striking and distancing was very high-level so Kwon knew he had to get the fight to the ground. One there, Kwon wasted no time in fighting for a Back Choke and making Abdollahi submit. ROAD FC is very honored that Abdollahi made his first MMA fight with us in Korea!

The three first fights on the Main Card were full of blistering action. Lee Yoon-Jun proved why he is one of the most impressive fighters in ROAD FC by knocking out Kim Won-Gi in less than a minute. His front kick is so strong, just like his previous opponent Takafumi Otsuka already knows! Jeon Doo-Jae knew exactly how to handle southpaw Lee Yong-Jae. Lee had very good timing, but Jeon acted confident in the cage and taunted Lee. In the end Jeon proved to the audience he was right. Ahn Sang-Il and Jeon Uh-Jin started the Main Card with a thrilling back and forth game that lasted into the third round. These exciting fighters had the whole audience cheering for them. Ahn came on strong in the final round and landed so many knees to Jeon in the clinch, but Jeon was so tough that he didn’t go down and the referee had to stop the fight for him!

Young Guns 10 brought together twelve of South Korea’s next generation of MMA champions. Munguntsooj Nandinerdene put on a fast and furious show against Lee Byeong-Hyeon in the opening fight. The Mongolian native knocked out his opponent in just 24 seconds! Yeo Myung-Goo vs Ryu Kyung-Gwan went the distance of two rounds and showed that they have skills both standing and on the ground. In the end, the judges unanimously decided Ryu’s ground fighting edged out Yeo’s knees in the clinch. Kim Hyo-Ryong defeated Jo In-Hang with an excellent striking combination, but for the first part of the round it was Jo’s Muay Thai striking that was very impressive!

Park Dae-Seong and Oh Ho-Tak gave everything they had to put on a show! The two young fighters played both standing and on the ground and tried to finish in every way possible. Park really shined in the final moments with judo throws and he earned the Unanimous Decision. Park Gwang-Soo and Kim Kyu-Hwa were equally determined to make it an exciting fight. Kim’s knees in the clinch were very impressive, but Park’s crisp striking made the judges side in his favor. Kim Min-Woo and Lee Dong-Jin brought the crowd to their feet. Kim hit Lee with everything that he had, but Lee was so tough and just wouldn’t be knocked down! Kim finally got out his big high kick and finished the Young Guns 10 card in spectacular fashion.

Here are the Official Results: