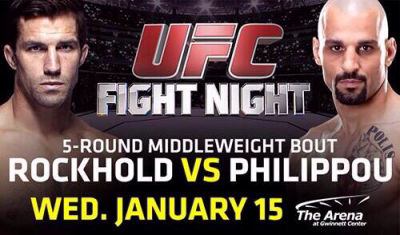 The UFC returns to FOX Sports 1 tomorrow night for UFC Fight Night 35.  The fighters will take to the scales later today in Duluth, GA but before you see them weigh-in, check out who’s picking who among our expert staff.

The main event will feature two middleweights trying to rebound from losses as Costa Philippou will meet Luke Rockhold. Share your picks with us in the comments section.

Jay Cee: Both of these guys are coming off a win and will enter this fight with confidence. Cole Miller has been know to finish many fights via submission, but has been going the distance and fighting to a decision in recent performances. Sicilia is quite the opposite, finishing many bouts via KO or TKO in the first or second round. I can see Sicilia pushing the pace in this one, forcing Miller to engage and take risks. Pick- Sam Sicilia wins via TKO.

Jan Gaetjens: Miller has the higher potential to fight a well-planned three rounds en route to a decision. Pick –Miller by decision.

Gary Thomas: I think the longer Miller can make the fight last, the better off he will be. Sicilia can finish fights but if Miller can avoid being caught, he should be able to grind a decision or nail a submission. Pick – Miller by decision.

Jack Bratcher: I like Miller’s experience advantage here. Also, on the ground Miller should have the advantage while Sicilia has the edge in stand-up. Pick -Miller via submission.

Jay Cee – John Moraga is a well-rounded fighter who can finish anywhere. His loss to Demetrious Johnson at UFC on FOX 8 snapped a seven-fight winning streak he had been on, so he will be anxious to return to the win column in impressive fashion. Meanwhile, Ortiz is new to the UFC and will want to follow up his successful debut with a big win over a known fighter like Moraga who has previously challenged for the title. Moraga’s slight experience advantage will be important, and I think it will allow him to find his range quicker, implement his game plan and finish the fight. Pick- John Moraga wins via Submission.

Jan Gaetjens: After getting fed to Demetrious Johnson for five rounds, this should be a relative walk in the park for Moraga. Pick –Moraga by submission.

Gary Thomas: My peers seem to be pretty high on Moraga. I like him and he is tough. I think Ortiz can hang though and watch for him to take Moraga into the third round where he either puts him away or gets the decision. Pick – Ortiz via TKO

Jack Bratcher: In his second fight inside the Octagon, Dustin Ortiz is fighting the former no. 1 contender John Moraga who is coming off a loss to the champ. This is the biggest fight of Ortiz’s career — and the toughest. Ortiz looked amazing in his UFC debut in Brazil. His improvement training with the Pettis brothers, Ben Askren and with Roufusport is very impressive. Pick -Ortiz takes this one via decision or submission.

Jay Cee:  Yoel Romero enters this fight coming off back-to-back knockout victories and now has the chance to make it three-in a row against Brunson. That said, Brunson performed a lot better in his last outing against Brian Houston then he did in his UFC debut against Chris Leben, where he delivered a lackluster performance. Brunson could be explosive early and definitely poses a threat, but I’m gonna go for Romero. Pick: Yoel Romero wins via TKO.

Jan Gaetjens: Romero has the definitive momentum advantage going into this fight, and has the clear edge when it comes to the ability to finish fights on his feet. Pick – Romero by (T)KO

Gary Thomas: Brunson is tough but he hasn’t fought a guy like Romero as of late. Romero is a hard hitter but he has some of the best wrestling in the game. Look for him to use it more in this fight than his last but know that he can end it in one punch. Pick – Yoel Romero via TKO.

Yoel Romero is a beast. I made the mistake of picking against him in his last fight. I won’t make that same mistake here.  Pick -Romero via TKO.

Jay Cee:  This is a tough fight for Mike Easton especially when you consider that he’s on a two fight losing skid and now has to face one of the toughest prospects in the bantamweight division, who comes from a camp (Team Alpha Male) that is currently on a tear. Both guys are well-rounded and posses knockout power, but I think Dillashaw will be able to catch Mike early and bounce back into the win column with a bang. Pick: T.J. Dillashaw wins via TKO.

Jan Gaetjens:   I have to admit Washington, DC hometown bias on this one, but I really do hope that, having separated himself from the craziness surrounding Team Lloyd Irvin in 2013, The Hulk can find himself back in the win column. Pick –Easton by (T)KO

Gary Thomas: I think Dillashaw will be too much. Good camp, still young and has great potential. Maybe the pressure of title talk was too much in his last outing but he should be able to put away Easton. Pick – Dillashaw via Decision.

Jack Bratcher: This could be a must-win for Easton. He hasn’t look very good in his last couple fights. Dillashaw is coming off a split decision loss but with Ludwig and Team Alpha Male behind him I have to think he’ll take this one via decision. .

Jay Cee: This is a very interesting fight, both guys have only one loss on their record, and they’ve both gone the distance in their last few fights. I can see their fight going the distance, but I think Larkin will be the hungrier to impress after making the jump over from Strikeforce. I think Larkin will be able to display some nice striking and control the fight. It could be close, but I am gonna go with Larkin.Pick: Lorenz Larkin wins via Unanimous Decision

Jan Gaetjens: I don’t see Larkin finding Tavares’ off-switch, but he certainly has more than enough tools on his feet to come away with his hand raised after 15 minutes. Pick –Larkin by decision

Gary Thomas: Larkin will be too much for Tavares even though I don’t see Brad just giving up in this one. Lorenz will more than likely come out in the better of all of the exchanges and will be just as aggressive as ever. He was robbed of fight of the night in his last outing but both these guys can make a run at that bonus here. Pick – Larkin via Decision.

Jack Bratcher: Larkin should be able to finish this one on the feet. Pick – Larkin via TKO.

Jay Cee: I think this is Rockhold’s chance to really let everyone in the UFC’s middleweight division know that he has arrived. Following a disappointing knockout loss to Belfort at UFC on FX 8, the former Strikeforce middleweight champion now has the perfect opportunity to show his worth. Philippou has high-level striking and could definitely make things difficult for his opponent, but I reckon Luke will be well prepared for this fight and will leave no room for error. Pick: Luke Rockhold wins via Submission.

Jan Gaetjens: Philippou’s last outing gave us a preview of what to expect against Rockhold. Luke has the ability to keep Philippou on the ground, neutralizing his striking and smothering the Cypriot for five rounds. Pick –Rockhold by decision

Gary Thomas: If Philippou can keep it standing he has a shot.  If he gets wrestled much, he’s out of water. That being said once someone is knocked out doesn’t it usually mean they are more apt to get knocked out easier? How about Philippou with a knockout in the fourth. Pick – Philippou via KO.

Jack Bratcher : Rockhold’s ground game should make the difference here. I think he’ll be able to grind this one out either for a decision or submission win. He’ll have to be careful though as Costas can end this one on the feet quickly. Pick – Rockhold via Decision.

******************
Think you can out-pick the Pro MMA Now team? Sound off below. Or for the brave at heart check out the UFC fight odds over at www.allpro.eu and put your money where your mouth is.