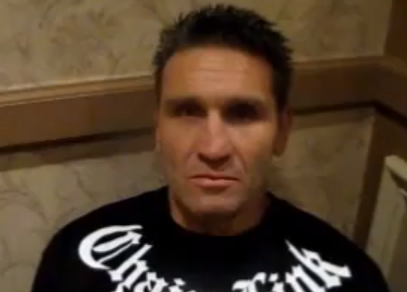 Where do mixed martial arts superstars go once their professional fight career begins to decline? Some hit the regional circuit. Some go to Japan. Some go to pro wrestling. UFC Hall of Famer Ken Shamrock has done all of the above, but now “The World’s Most Dangerous Man” has a new gig –protecting gangster rapper extraordinaire 50 Cent.

That’s right, the 49-year-old former UFC Superfight and Pancrase Champion was spotted this week at the CES convention in Las Vegas working as a body guard for the platinum selling recording artist.

50 Cent has SERIOUSLY upgraded his personal security team … ’cause one of the guys watching his back is UFC Hall of Famer (and ex-WWE superstar) Ken Shamrock!!!!

49-year-old Shamrock was spotted on the rapper’s personal protection detail at the CES convection in Las Vegas yesterday … and afterward, Ken confirmed he’s now working for a company that does private security for several “high-end clients,” including Fiddy.

I wonder if 50 Cent knows Ken is 4-10 in his last 14 fights or during one stretch in his career got knocked out five straight times? Maybe it doesn’t matter, but if you are planning to start some beef with 50 and need to get through his security force first, your best bet will probably be to aim for Ken’s chin. Just watch out for the leg locks!

In all seriousness, good for Ken. This gig probably pays better than the majority of money-making endeavors once great fighters get involved with and DEFINITELY pays better (and is better for one’s long-term health) than trying to eek out a living on MMA’s regional circuit.