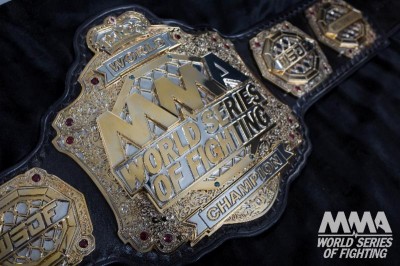 The challenge has been thrown down by World Series of Fighting. They are willing to put their fighters up against Bellator MMA fighters to see who is the number two promotion on the planet. They want to do it live on pay per view.

The challenge is out! #WSOF vs. @BellatorMMA in a 10-fight PPV, winner takes all. What do you think, who wins? pic.twitter.com/LX4m5NigUW

WSOF matchmaker joined Ariel Helwani on today’s The MMA Hour to talk about it. Ali Abdel-Aziz says he is ready to entertain the fans and put the ranking talk to bed. Not only did Abdel-Aziz talk about this challenge but talked about branding WSOF across the globe including Japan, Brazil and most recently Canada.

What do you think? Would you as a fan put your money down for this fight card and enjoy a Bellator vs. WSOF pay per view?

World Series of Fighting returns to the Seminole Hardrock Hotel and Casino on January 18th for WSOF 8. Two title fights are slated to happen as Justin Gaethje will battle Richard Patishnock for the inaugural lightweight title and Jessica Aguilar will look to stay atop the strawweight division when she meets Alida Gray for the WSOF’s first strawweight title.

Stay close to ProMMAnow (www.prommanow.com) for more on WSOF 8 and this epic fantasy card that has been proposed.