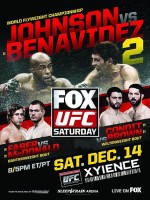 The UFC on FOX  9 event is set to take place on Saturday night from Sacramento, California, and will be headlined by the highly anticipated rematch between UFC flyweight champion Demetrious Johnson and challenger Joseph Benavidez. The two fought for the inaugural title at UFC 152.

The entire fight can be viewed here. Johnson went on to edge Benavidez via split decision and has successfully defended the title twice since then. The fight night will begin with preliminary fights airing online at 4:30 p.m. ET, and will then transition over to FOX Sports 1 at 5 p.m. ET. The main card will begin at 8 p.m. ET on FOX(big FOX).

The top five questions going into the UFC on FOX 9 are below:

What type of TV ratings will this event pull compared to past events on FOX?

Demetrious Johnson has defended his title on FOX twice with mixed reviews. The first time at UFC on FOX 6 which took place in January offered an extremely strong showing with his fight against John Dodson peaking at over 5 million viewers. However, the event was heavily promoted during the NFL football season, and this event on Saturday night will be no different. When Johnson fought for the second time on FOX at UFC on FOX 8, the viewership plummeted to just over 2 million viewers. That bout took place in July when TV ratings usually take a massive hit, not to mention the event couldn’t be promoted during NFL games due to them being in the off season. I think the UFC on FOX 9 show will have a strong rating, which is anything north of three million viewers. This event has been promoted well leading up to the fights, and has a strong card to back it up.

Longtime MMA veteran Urijah Faber as been at the top of his weight division for a very long time. In fact, he has beaten everyone except whoever is holding the belt at the time(he has lost both UFC title fights). Faber has rattled off three consecutive wins his last loss against UFC interim bantamweight champion Renan Barao at UFC 149, and will be facing another young gun in Michael McDonald on Saturday. McDonald could be the future of the division at only 22 years old. In fact, he has also faced Barao for the title and lost via fourth round submission, but the young fighter rebounded nicely with an impressive win in his last outing against Brad Pickett. Does Faber have enough in the tank at 34 years old to to best McDonald? Faber is a savvy veteran and still possesses most of the skills(quickness/transitions) to beat most top fighters. It’ll be interesting to see how McDonald handles the moment, and if he can pull off the upset it would definitely be a passing of the torch type of moment.

Will Chad Mendes put himself in position to challenge for the title with a win over Nik Lentz?

Mendes has rattled off four consecutive wins since getting decimated by Jose Aldo at UFC 142. However, Mendes has drastically improved as a fighter along with all of his teammates at Team Alpha Male. In fact, he has won via TKO/KO in all four of those fights, including a stoppage win over the always durable Clay Guida. Lentz is as tough as they come and has rattled off three consecutive wins since moving down to the featherweight division. Lentz has only been stopped three times in nearly 30 fights, if Mendes keeps his TKO/KO streak going I don’t know how he can be denied another title shot.

Could Joe Lauzon and Mac Danzig be fighting for their respective UFC careers on Saturday night?

Will Bobby Green/Pat Healy steal the show on Saturday night during their bout?

Both fighters are former Strikeforce fighters who have made their mark in short fashion since coming over to the UFC. Green is (2-0) with both wins coming via stoppage. Healy is coming off a loss against Khabib Nurmagomedov in his last outing, however, he really made an impression with his fight against Jim Miller. Healy won the bout via submission, but the bout was later overturned to a No Contest due to Healy testing positive for marijuana. The interesting note is that Green is stepping in on short notice to replace an injured Jamie Varner. Both fighters are really exciting and this bout could really put the winner in the upper echelon of lightweights in the UFC.

Be sure to make ProMMAnow.com your home for UFC on FOX 9 news and coverage this week.