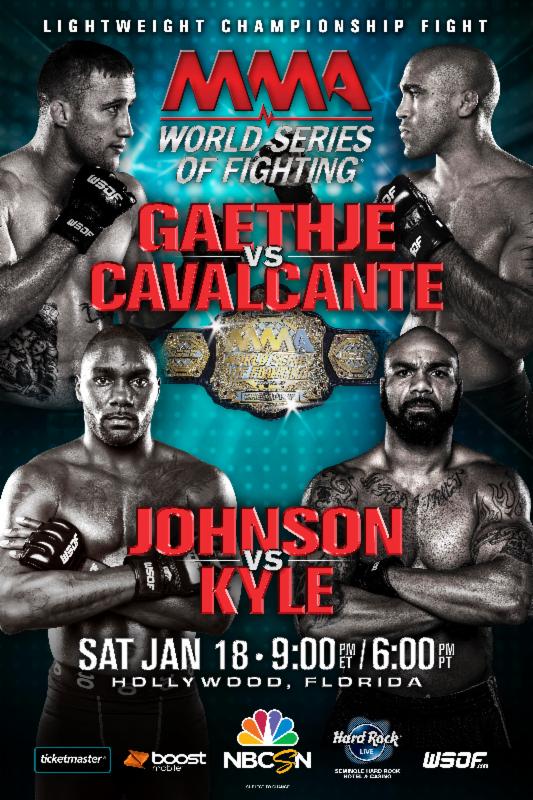 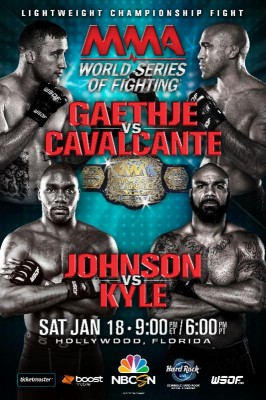 The co-feature sees light-heavyweight sluggers Anthony “Rumble” Johnson (15-4) and Mike “MAK” Kyle (20-10-1) clash in a rescheduled matchup that seems sure to produce fireworks.

“This has been an incredible year for ‘World Series of Fighting,’ and we’re excited to announce that our first event of 2014 will feature another championship fight,” said Ray Sefo, World Series of Fighting president. “Justin and ‘JZ’ looked well on their way to putting on a fantastic fight in their first meeting before an early cut ended the fight. Justin wants to prove he was deserving of that win, while ‘JZ’ hopes to erase the frustration of the loss. The victor will prove his point and also walk away with our first-ever lightweight title.”

The 25-year-old Gaethje is a member of Colorado’s Grudge Training Center and has already earned WSOF wins over Dan Lauzon, Brian Cobb and Cavalcante. Fighting professionally since 2011, Gaethje is undefeated in his first 10 career fights, and nine of those have ended via stoppage, including eight by knockout.

“It feels like all of the hard work is paying-off by getting to showcase my skills on the headliner of one of the most respected new promotions in the MMA world,” Gaethje shared. “That being said, I find it offensive that Gesias can find the courage to lock himself in a cage with me again. I’m pushing myself like never before, because come January 18th, I have one goal and that is to put Cavalcante to sleep.”

Meanwhile, Blackzilian fighter Cavalcante is 2-1 in the decagon, sandwiching wins over Tyson Griffin and T.J. O’Brien around the March 2013 loss to Gaethje. A veteran of the sport since 2004, Cavalcante has also competed for Strikeforce, DREAM and K-1. Early in his career, Cavalcante scored two tournament wins while competing for K-1 Hero’s, but the WSOF lightweight title would certainly mark the high point of the 30-year-old’s professional career.