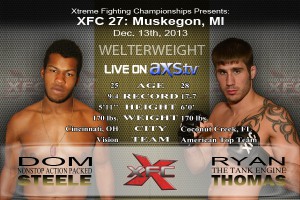 The XFC will crank the heat up in the L.C. Walker Arena, when they kick off Frozen Fury with a Welterweight showdown between Dominique Steel and Ryan Thomas.  The Steele/Thomas match-up kicks off the televised portion of XFC 27: Frozen Fury, LIVE on AXS TV from Muskegon, Michigan. “The Tank Engine” Thomas looks to add to his current five fight win streak, while his opponent, Dom Steele, looks to raise his MMA stock with a win over the talented and dangerous XFC standout.

Arguably Ohio’s most charismatic and entertaining fighter, Dom “Nonstop Action Packed” Steele (9-4) prepares for his XFC and AXS TV debut, when he faces the seasoned Ryan Thomas on December 13th. Although Thomas is the fighter coming in with the higher profile resume, Steele is no stranger to bright lights and big fights. The man who refers to himself as “Nonstop Action Packed”, has earned opportunities in both Strikeforce and Bellator, with his most notable fight to date being a decision loss to Brian Rogers at Bellator 78. Ready to take that next step in his career, Steele will have a national television audience watching as he attempts to checkmate one of the best chess players in the sport. With four of his nine wins coming by way of knockout, Steele will need to use his reach and power to send an early message to Thomas. Known around the Ohio region as a fighter with unmeasurable heart, Dom Steele has all the tools needed to shock the world with a win in Muskegon. If the former heavyweight approaches this fight with the same determination and drive he lives his life with, we could see a superstar emerge in Michigan.

Ryan “The Tank Engine” Thomas (17-7) has quietly become one of the hottest Welterweights in mixed martial arts. The 29 year-old Illinois native is currently riding a five fight win streak that dates back to December of 2011. The last time we saw Thomas was in Albuquerque, New Mexico at XFC 25, when he defeated Rocky France by Triangle Choke. In his professional career, the submission machine has tapped an impressive 65% (11) of his opponents, while mixing in six knockouts. The American Top Team fighter’s “kill or be killed” attitude is apparent, as only 2 of his 24 professional fights have gone to the judge’s score cards. Thomas will bring a wealth of experience into his bout with Dom Steele. With XFC, Bellator and UFC bouts under his belt, Thomas has been inside the cage with some of the sport’s top fighters. The Tank Engine’s most notable opponents include: Corey Hill, Matt Brown, Ben Saunders and former Bellator Welterweight Champion Ben Askren.

Gary Thomas, of Bluegrass MMA, has been covering the XFC for over two years and has also followed Dom Steele since his pro debut. Thomas weighed in on the upcoming fight and had this to say: “This is a tough fight for me to call.  I have been covering Dom Steele since he turned pro as a vicious heavyweight, to the well-rounded Welterweight he is now. The guy has the biggest heart I’ve ever seen in a fighter. The problem with that is, against Ryan Thomas, heart isn’t going to get it done. Steele is going to have to be smart and use his head more than his heart. Ryan Thomas is surgical with his skills. Heart could get you hurt in a fight with Thomas, you have to fight smart. That being said, Ryan can’t sleep on Steele. If he takes Steele lightly, it’s going to cost him.”

Myron Molotky, President of XFC International, had this to say about the upcoming event taking place in his home state. “I’m very pleased to have the XFC heading to Muskegon, Michigan! We are one of the largest nationally televised MMA promotions on the planet, putting on some of the best male and female fights in the industry. On December 13th, at the LC Walker Arena, the XFC is bringing one of the biggest televised events the Lake Shore area has ever seen and this bout between Dom and Ryan is just one of many on the stacked card. Living here in West Michigan for over 30 years, growing up in the hockey scene, I know the sports fans from around this area are going to enjoy what the XFC brings to Muskegon in December.”

Xtreme Fighting Championships invades the Great Lakes State on December 13, 2013 for XFC 27: Frozen Fury. The event is presented by ICRealTime Security Solutions and will be broadcast Live on AXS TV from the L.C. Walker Arena in Muskegon, MI, beginning at 8pm CT/9 pm ET. For more information on the event visit www.XFCMMA.com and to purchase tickets visit  www.beafantickets.com. For daily updates and news, follow us on Facebook and Twitter @OfficialXFC.