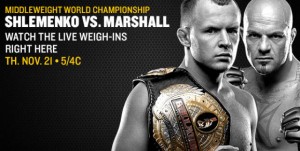 The final event of Season 9 goes down tomorrow night but before the action begins the fighters must weigh-in today at the Sands Bethlehem in Pennsylvania for Bellator 109. Alexander Schlemenko puts his middleweight title on the line when he faces Doug Marshall in the main event.

Welterweights Rick Hawn and Ron Keslar were both late additions to the Season 9 tournament but have found themselves one win away from $100,00 and a shot at the vacant title. Will Brooks and Alexander Sarnavskiy will battle in the lightweight tournament finals.

The main card as always will air live on Spike TV with the prelim bouts airing right here on ProMMAnow (www.prommanow.com)

The first fighter is set to hit the scale at 5 p.m. ET/ 4 CT and you can watch them right here.