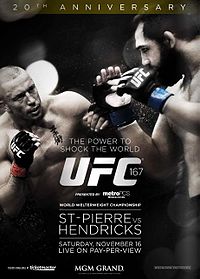 The UFC 167: St-Pierre vs. Hendricks PPV event is set to take place on Saturday, November, 16, at the MGM Grand Garden Arena in Las Vegas, Nevada. UFC welterweight champion Georges St-Pierre will look to defend his title for the ninth consecutive time against hard hitting Johny Hendricks.

Also, this will mark the 20th anniversary show for the UFC, dating back to the inaugural event which took place in 1993 in Denver, Colorado. It’s a solid event on paper with former UFC light heavyweight champion Rashad Evans taking on Chael Sonnen in the co-main event. Also, welterweight standout Rory MacDonald will take on Robbie Lawler in a bout that could have title implications. Let’s take a look at the top three questions going into the event.

Will Georges St-Pierre continue to deliver the PPV goods for the UFC?

UFC welterweight champion Georges St-Pierre is the biggest PPV draw in the UFC. He has constantly delivered huge PPV draws for the company over the past five years or so. In fact, his last fight against nemesis Nick Diaz almost drew one million PPV buys in March. However, that was a fight that had real animosity between the fighters and the buildup for the fight took a pretty good while due to injuries to St-Pierre and Diaz being Diaz. St-Pierre arguably faces his toughest test in Johny Hendricks on Saturday, because Hendricks has definitive one punch KO power. There is huge intrigue from the hardcore fans, with some hoping that Hendricks can end the reign of the longtime champion. Hendricks isn’t a big draw from casual fans, but St-Pierre’s following is usually enough to carry the load PPV wise. I’m not sure this fight will draw near one million PPV buys. However, if it hits the normal 700-750,000 PPV buyrate, all will be well in that regard.

Does Rashad Evans move down to the UFC middleweight division win or lose after Saturday night?

Rashad Evans will be taking on former UFC middleweight title contender Chael Sonnen on Saturday night in a light heavyweight matchup. However, Evans has flirted with moving down to the UFC middleweight division in the past year or so. He likely will not earn another title shot to face UFC light heavyweight champion Jon Jones. Not to mention it would probably take another year or so for that to happen if indeed the fight were to take place. Evans has a short road to a title shot if he moves down to middleweight if he beats Sonnen who just fought for that title just over a year ago. The division has really come to life with other fighters moving into the division like Lyoto Machida(who also used to fight at light heavyweight as well). He almost has to make the move if he loses to Sonnen as it would be his third loss in his last four fights. Also, beating Sonnen would give him a small bit of clout as Sonnen was one of the best middleweights in the world when he competed in that division.

Does Rory MacDonald earn a title shot with a win over Robbie Lawler?

That’s the million dollar question it seems. MacDonald and Georges St-Pierre train together and likely would not want to fight one another. If St-Pierre retains the title against Hendricks, things could get tricky as MacDonald has clearly shown he’s one of the best welterweights in the world. However, besides MacDonald, St-Pierre would have pretty much cleaned out the welterweight division. If Hendricks wins, I think St-Pierre would be given an immediate rematch since he has reigned over the division for so long…and rightfully so. If Lawler wins it would be his third consecutive win since returning to the UFC and it would be his second win over a top 10 welterweight(Josh Koscheck was ranked at the time). That could warrant a shot at the title as well depending on what happens with the St-Pierre/Hendricks fight.

Be sure to make ProMMAnow.com your home this week for UFC 167 news and coverage.