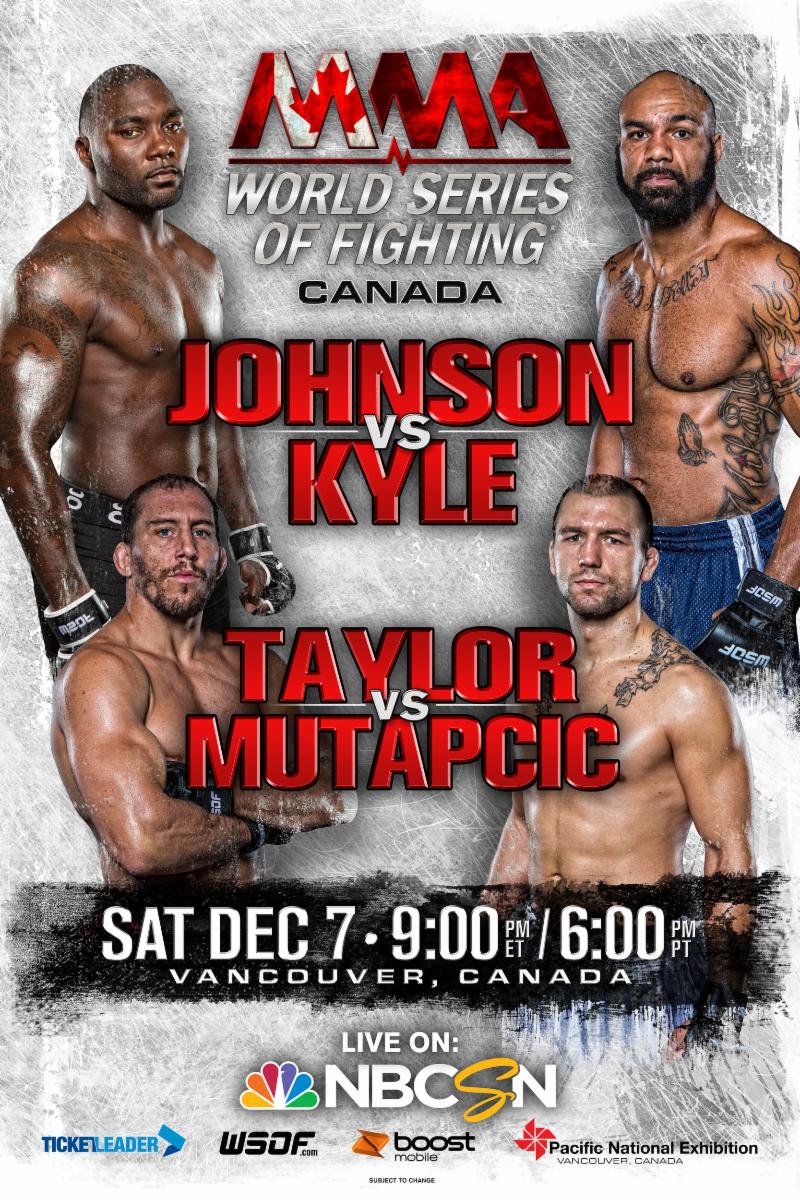 World Series of Fighting’s first-ever Canadian fight continues to fill out, as three new preliminary contests have been booked for World Series of Fighting 7, including a light heavyweight matchup of Dwayne “D-Bomb” Lewis (13-8) vs. Kalib Starnes (15-8-1), a featherweight contest of Shawn Albrecht (9-5) vs. Josh Machan (11-4) and welterweights Michael “The Messenger” Hill (5-2) vs. Jordan Knippelberg (8-2).

The trio of bouts take place on the preliminary card of “World Series of Fighting 7: Johnson vs. Kyle,” which streams live on www.wsof.com starting at 6 p.m. ET/3 p.m. PT on Dec. 7 at PNE Agrodome in Vancouver, British Columbia, Canada. The night’s main card airs on NBCSN at 9 p.m. ET/6 p.m. PT following prelims.

Tickets for World Series of Fighting 7, which start at just $29, are available at TicketLeader.ca.

“We’re incredibly excited to be making out first trip to Canada, and our preliminary card is going to feature a great mix of the country’s best veteran and prospect fighters, who will enjoy an opportunity to impress a worldwide audience,” World Series of Fighting President Ray Sefo said. “Add that to an amazing main card that features Anthony Johnson vs. Mike Kyle in the headliner, and I think Canadian fans are going to be in for a great night of action.”

Lewis, of Fort McMurray, Alberta, boasts past clashes with MMA notables Razak Al-Hassan, Chris Camozzi Marvin Eastman, Wilson Gouveia, Ryan Jimmo and Emanuel Newton, among others. Lewis briefly retired from the sport following a particularly frustrating loss to Gouveia, but the draw of the sport was too strong, and he returned to the cage in July, scoring a unanimous decision win over Tim Chemelli.

Albrecht, of Port Coquitlam, British Columbia, is the head coach of West Coast Brazilian Jiu-Jitsu with seven years of professional MMA experience. Despite his ample grappling history, Albrecht has earned eight of his nine career wins by way of knockout.

Meanwhile, the 26-year-old Machan has elected to handle his fights in a different manner, notching 10 of his 11 career wins by way of submission. The Red Deer, Alberta, resident is also in the midst of an incredible run of success, winning 11 of his past 12 fights including an incredible run of four-straight wins by tapout – two of which took 22 seconds or less.

Hill, of Kelowna, British Columbia, is perhaps best known for his time as a cast member on “The Ultimate Fighter 16,” where he fought as a member of UFC heavyweight Roy Nelson’s team. Most recently, he came up short in a bid for the Aggression Fighting Championship welterweight title, losing by submission with just 31 seconds remaining in the five-round championship bout.

Meanwhile, Knippelberg, of Trail, British Columbia, brings a three-fight win streak to the cage, a run that includes two submission wins of one minute or less. Overall, Knippelberg has won seven of his past eight fights and owns five of his eight career wins by submission.