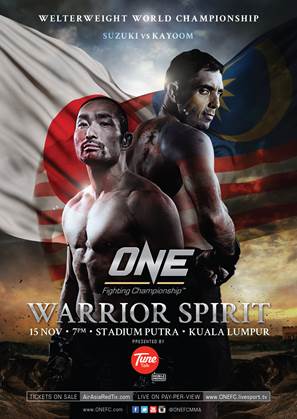 01 November 2013 – Singapore: ONE Fighting Championship™ (ONE FC), Asia’s largest mixed martial arts organization with a 90% market share, presented by Tune Talk, has added three fights to the blockbuster Malaysia card set to take place on 15 November at the iconic Stadium Putra in Kuala Lumpur. Malaysian favorites Peter Davis and Saiful Merican have been added to the card, going up against Alaa Mazloum from Egypt and Cambodia’s Tok Sophon respectively. Two of the top Middleweight prospects are also set to make their ONE FC debuts when Brazilian Jiu-Jitsu World Champion Leandro Ataides squares off against France’s Brayan Rafiq.

Tickets for ONE FC: WARRIOR SPIRIT, presented by Tune Talk, are on sale now at www.AirAsiaRedTix.com. Tickets are priced at RM348 for the complete VIP experience that includes exclusive red carpet entrance, access to the VIP lounge and premium cage-side seating. The categories that follow are priced at RM248, RM148, RM98 and RM48 respectively. Booking fees and service charges apply.

Fans around Asia can catch all the action live on STAR Sports. Check your local listings. Also, fans from around the world can witness the action online via live streaming at www.onefc.livesport.tv. Main card fights will be available for purchase at just US$9.99.

CEO of ONE Fighting Championship™ Victor Cui stated, “ONE FC: WARRIOR SPIRIT promises to be a night of adrenaline-pumping action that will have the Malaysian fans on the edge of their seats as ONE FC continues a multi-city tour across Asia. Malaysian stars Peter Davis and Saiful Merican make their return to the ONE FC cage in front of a partisan Malaysian crowd. Both of them are hugely popular for their fighting style and their bouts could potentially be battling for Fight of the Night honors.”

Peter Davis is a Wuji Chuan exponent and the face of mixed martial arts in Malaysia. Along with being the top Lightweight in Malaysia, he is also a prominent celebrity with a long list of modeling and acting roles to his name. Davis consistently finishes his opponents in impressive fashion and he will be looking to use his lanky frame and significant reach advantage to propel him to victory against Egypt’s Mazloum.

Alaa Mazloum is a Wushu expert training out of Egypt’s premier mixed martial arts gym, Egyptian Top Team. Never afraid to back down from a brawl, Mazloum will be looking to stand and trade and will love nothing more than to silence the Malaysian crowd and become the first Egyptian to win inside the famed ONE FC cage.

Saiful Merican is one of the top Muay Thai practitioners in Malaysia. He has more than 100 professional Muay Thai fights and possesses ferocious kicks that have knocked out many opponents. Nicknamed “The Vampire” by fans for his fast and aggressive style, he’ll look to notch up another victory when he takes on Cambodia’s Tok Sophon.

Tok Sophon is set to be the third Cambodian to appear in the ONE FC cage. He will be looking to officially record Cambodia’s first victory in Asia’s largest mixed martial arts organization, after compatriots Long Sophy lost his debut and Khim Dima had his bout changed to a no-contest due to illegal strikes. Sophon is a Khmer boxing veteran and it will be an interesting clash of styles when he meets Merican, a Muay Thai specialist.

Leandro Ataides is a 5-time Brazilian Jiu-Jitsu world champion who is currently undefeated in his professional mixed martial arts career. Originally hailing from Rio De Janeiro, he now fights out of Evolve MMA in Singapore. He will definitely look to impose his grappling skills as he makes his ONE FC Middleweight debut against intimidating Frenchman Brayan Rafiq.

Brayan Rafiq is a top French Middleweight who will be competing in ONE FC for the first time. His mixed martial arts career has brought him to Costa Rica, Canada, Japan and Brazil thus far, with Malaysia soon to be added to his resume. The veteran is returning to action after a hiatus of nearly three years. Rafiq has won six of his bouts via submission, and will be comfortable should his opponent decide to take him to the ground.

The main event of the evening will crown the inaugural ONE FC Welterweight World Champion. The bout features a battle between the top mixed martial artist to ever come out of Malaysia, Adam Shahir Kayoom, against Japanese slugger Nobutatsu Suzuki.