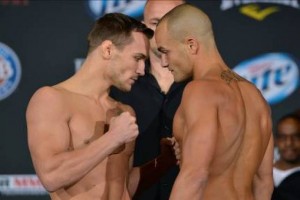 Long Beach, CA. (November 1, 2013) – The Bellator MMA weigh-ins have been completed from California’s Long Beach Arena in preparation from Bellator MMA’s November 2nd event, which will be headlined with the Lightweight World Championship II between current Bellator Lightweight Champion Michael Chandler and Eddie Alvarez.  The event will also feature the Light Heavyweight and Featherweight World Championships.