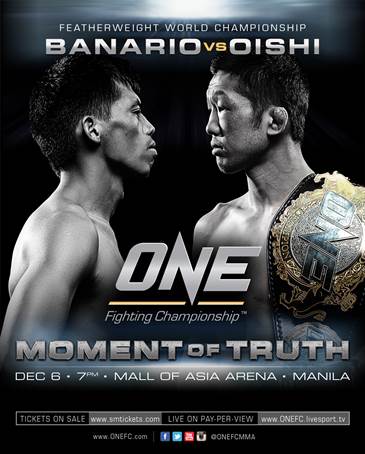 ALSO: EDUARD FOLAYANG AND GEJE EUSTAQUIO ARE BACK IN ACTION

PLUS: FILIPINA MMA SENSATION JUJEATH NAGAOWA SET TO REPRESENT THE PHILIPPINES WHEN SHE MAKES HER HIGHLY-ANTICIPATED ONE FC DEBUT

TICKETS FOR ONE FC: MOMENT OF TRUTH ARE ON SALE NOW
AT WWW.SMTICKETS.COM

24 October 2013 – Manila: ONE Fighting Championship™ (ONE FC), the largest Mixed Martial Arts (MMA) promotion in Asia with a 90% market share, returns to the Philippines for another blockbuster event on 6 December 2013 at the world renowned SM Mall of Asia Arena. Headlining the event is the most highly-anticipated rematch in ONE FC history – ONE FC Featherweight World Champion Koji Oishi taking on former world champion Honorio “The Rock” Banario. Fight fans have been eagerly awaiting the return of ONE FC to the Philippines after closely following the intense non-stop, adrenaline-pumping action that has accompanied the promotion throughout the multi-city tour this year. Now the wait is over. Expected to be yet another sold-out event, fight fans are set to pack out the 20,000-seater SM Mall of Asia Arena once again for a night of world-class MMA action.

Fans in Asia can catch all the action live on STAR Sports. Check your local listings. Also, fans from around the world can witness the action online via live streaming at www.onefc.livesport.tv. Undercard fights are available for viewing free-of-charge and the main card fights will be available for purchase at just US$9.99.

CEO of ONE Fighting Championship™ Victor Cui stated, “We are coming back to Manila to put on one of the greatest fight cards in Asian MMA history. We know that the fans have been eagerly hoping for a rematch between ONE FC World Champion Koji Oishi and Honorio Banario and we are delivering what they want. This is a must see rematch for every MMA fan on the planet. Also, we are bringing in international and national stars. Eduard Folayang and Geje Eustaquio will be on the stacked fight card. Plus, the fierce MMA darling of the Philippines, Jujeath Nagaowa, will make her ONE FC debut in front of thousands of screaming home fans. We are putting together a fight card that will blow away the thousands of passionate Filipino fans in attendance and the millions watching live around the world are set for another evening of world-class MMA action featuring the best in Asia.”

The ONE FC Featherweight World Championship title fight will be a battle between reigning and defending world champion Koji Oishi versus the heavy-handed and agile Filipino, Honorio Banario.

ONE FC Featherweight World Champion Koji Oishi is a veteran of 44 fights and a former Lightweight King of Pancrase. He has only lost two of his last 18 fights and is a seasoned veteran who has been consistently facing the best opposition in the world. At ONE FC: RISE TO POWER, he captured the ONE FC Featherweight World Championship title by knocking out Honorio Banario in front of Banario’s home crowd. Oishi has fought almost 100 rounds in his career and faced over 36 opponents, making him one of the most experienced Featherweights in the world. On 6 December, Oishi will finally get to show his critics that he is the true champion and will look to KO Banario once again.

Honorio Banario is one of the top MMA fighters to ever come out of the Philippines and the first Filipino to ever bring back an MMA world title to the Philippines. He is a member of the legendary Team Lakay where he trains alongside fellow local champions like Eduard Folayang, Kevin Belingon and under head coach Mark Sangiao. Banario’s background is Wushu, an ancient Chinese martial art whose adherents are recognizable by their sideways stance and diverse range of strikes. He loves to strike from range and always keeps opponents guessing what his next move will be. Banario will stop at nothing to once again proclaim himself as the top Featherweight in Asia and seek redemption in front of the 20,000-strong home crowd who will be there to support him.

Eduard Folayang is a former Asian Games medalist in Wushu, URCC Welterweight Champion and the best Lightweight to come out of the Philippines. He possesses an array of unorthodox striking and has been working hard to complement that with a wrestling game. He has faced and beaten some of the top Lightweights in Asia and will look to chalk another name to that list on 6 December.

Geje Eustaquio is a skilled Flyweight who trains alongside the aforementioned Eduard Folayang and Honorio Banario at Team Lakay in the high altitudes of Baguio City. Extremely quick and agile, he is proficient in every facet of mixed martial arts. With the Flyweight World Championship still up for grabs, Eustaquio is looking to stake his claim on a title shot with an impressive victory.

Jujeath Nagaowa is an accomplished female boxer from the Philippines who is looking to transition into the sport of mixed martial arts. The former WBC Asia Atomweight Champion has faced and defeated the top names in female boxing in Asia and will look to do the same in MMA when she embarks on her ONE FC career. She has lightning quick punches and will be looking to showcase that at ONE FC: MOMENT OF TRUTH.

1 thought on “ONE FC returns to Manila, Philippines on December 6 for ‘Moment of Truth’”