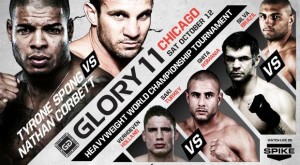 Spike TV is broadening their combat sports coverage and it starts tonight with Glory 11 live from Chicago. Crossover sensation Tyrone Spong will go toe to to with a familiar dancing partner in Nathan Corbett. Corbett knocked Spong out in 2007 but it was ruled a no contest after some confusion over referee instructions.

Spong, a dutch kickboxer, is 2-0 in MMA under the World Series of Fighting Banner. He has won 10 out of 12 since his meeting with Corbett

A one night heavyweight tournament is also on deck. Daniel Ghita will meet Anderson Silva (no, not the Spider) and Gökhan Saki will battle. Rico Verhoeven The winners advance to fight for a second time. There is a tournament reserve bout of Errol Zimmerman vs. Hesdy Gerges just in case someone is unable to continue

Here is the lineup for tonight’s action

One thought on “Glory 11 brings kickboxing to the masses tonight”