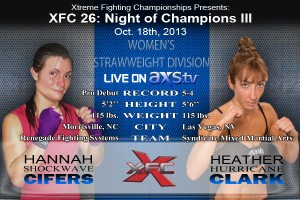 Injuries happen.  Promoters, fighters and fans have all learned to accept this reality. But, what many people seem to forget is, fighters are also human, and a simple illness can sneak up on you at the worst possible time.  Unfortunately for Strawweight Brianna Van Buren, this is the situation she finds herself in, just one week out from her nationally televised fight with Heather Jo Clark.  Van Buren’s camp contacted the XFC early Tuesday morning to inform them of Brianna’s Flu like symptoms, and by late afternoon it was confirmed; Van Buren would not be cleared to compete at Night of Champions III on Oct 18th.

At 8:30 p.m. on Tuesday, XFC President John Prisco received at text message that simply read, “You can stop looking for an opponent for Heather.  Send me the contract”.

It was at that same time in Charlotte, North Carolina, that 21 year-old Hannah Cifers had just finished her evening training session, when she overheard her coaches discussing the news of Van Buren’s pull.  After almost a year of being scouted by Prisco, Cifers’ coaches had already begun negotiations for her debut with the promotion.  The only detail left to finalize was when and where would it take place.  Without hesitation, it was Cifers herself that reached into her gym bag, pulled out her phone, and sent the text that convinced John Prisco that the girl he was searching for was already on his radar.

Pulled straight from the pages of a Hollywood movie script, virtual unknown Hannah “Shockwave” Cifers will get her “Rocky” moment, when she takes on “Hurricane” Heather Clark at XFC 26: Night of Champions III.  The hard-hitting farm girl from North Carolina brings an impressive 7-1 amateur MMA and 6-0 Muay Thai record into the contest with Clark.  The product of Renegade Fighting Systems will play the role of underdog, as she looks to shock the world with a win over the seasoned veteran from Jackson’s MMA & Syndicate MMA.

XFC President John Prisco had this to say about the Cifers signing: “To me, this is what our sport is all about.  Hannah Cifers was a girl we had already evaluated and had agreed to bring into the XFC for her debut.  Rather than asking for, or assuming she would get “safer” fights to start her pro career, this girl wants to lay it all on the line and make a name for herself by knocking off one of the top females at 115 pounds.  I won’t lie, I hesitated for a moment, but then I started to really think about it.  Why not?  Maybe that is what this sport needs, more “Rocky moments”.  Why not give this fighter her shot?  I get so many fighters that try to sell me on the “I stay ready, I’ll fight anybody, anytime, anywhere” story, but when you make the call, there’s always a reason why they can’t.  Hannah Cifers didn’t lie when she told me she would always stay ready for her call.  She sold me when she sent me the first text that said, “Stop looking for an opponent and send me the contract”, but she sealed the deal when she sent the second text that read, “Don’t take Heather’s fight away from her.”  She gets it.  Win or lose, Hannah Cifers has already earned my respect and I believe the fans will enjoy the action and look at this bout the same way I do.”

Xtreme Fighting Championships returns to Music City USA for XFC 26: Night of Champions III on October 18, 2013. The event is presented by ICRealTime Security Solutions, Liquid Ninja Energy Drink & Beafantickets and will be broadcast Live on AXS TV from the Municipal Auditorium in Nashville, Tennessee, beginning at 9pm CT/10 pm ET. For more information on the event or to purchase tickets, visit XFCMMA.com or beafantickets.com. For daily updates and news, follow us on Facebook and Twitter @OfficialXFC.