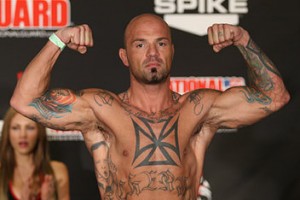 Doug “Rhino”Marshall made an impressive run through the Bellator Season 8 middleweight tournament and capped things off with a victory over Brett Cooper. Injury forced him out of his championship matchup with current title holder Alexander Shlemenko that was set for Bellator 98.  Today Bellator announced that fight will now happen at Bellator 108 on November 15th in Atlantic City.

Shlemenko scored a unanimous decision victory over Brett Cooper that extended his current winning streak to 11. The Russian fighter has not lost since 2010 with over half of his wins coming by way of stoppage. Shlemenko won the vacant title with a second round knockout win over Maiquel Falcao at Bellator 88.

Marshall racked up wins over Andreas Spang , Brett Cooper and a tournament finale decision over Sultan Aliev. Marshall sits at 18-6 and is a former WEC champion. He holds five knockout wins in his last six fights.

Bellator 108 is set to take place at Revel Atlantic City in New Jersey on November 15th. The main card as always airs on Spike TV following the prelims that can be seen on Spike.com.