Joe Lauzon vs. Mac Danzig added to UFC on FOX 9 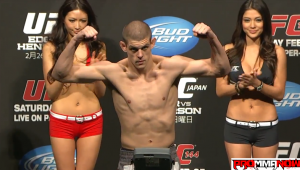 The UFC on FOX 9 event is quickly taking shape with several bouts announced for the December affair. Josh Thomson will take on Anthony Pettis for the UFC lightweight title in the UFC on FOX 9 main event on December 14 in Sacramento, and Urijah Faber will take on Michael McDonald in the co-main event.

Lauzon (22-9) is coming off one of the most lopsided losses of his career against Michael Johnson who battered for three rounds to take a unanimous decision. Lauzon has now dropped three of his last four bouts, including a headkick KO loss against Anthony Pettis at UFC 144. However, Lauzon has taken home “Fight of the Night” honors is two of those four fights.

Danzig (21-11-1) is coming off a KO loss at the hands of Melvin Guillard in his last outing in July. The former TUF winner has also dropped three of his last four bouts in the UFC, and will be looking to potentially stay in the UFC with a win.

The UFC on FOX 9 card thus far is below:

Stay tuned to ProMMAnow.com for more UFC on FOX 9 news and coverage.