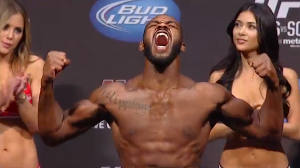 The UFC 165 PPV event will take place on Saturday night at the Air Canada Centre in Toronto, Canada. UFC light heavyweight Jon Jones will look to defend his title against challenger Alexander Gustafsson in the co-main event.

Jon Jones has proven to be a legitimate PPV draw during his reign having amassed at least 450,000 PPV buys in each of his fights since becoming champion. The highest PPP buyrate he has achieved was the fight with Rashad Evans in which the former training partners hit the 700,000 PPV mark. His last title defense against MMA promo cutting expert Chael Sonnen amassed 550,000 PPV buys. Gustafsson is still relatively unknown too most causal MMA fans, but the co-main event does feature a title fight though it hasn’t been promoted at all. There has been roughly three weeks since the last UFC PPV, but the huge boxing match between Mayweather/Alvarez just took place on Saturday night. It’ll be interesting to see if fans are willing to shell out the bucks again on Saturday night.

Does Alexander Gustafsson have a legit shot at beating Jon Jones on Saturday night?

I saw where Gustafsson is as high as +675 as the betting underdog going into this fight. It’s hard not to put him as a huge underdog considering who and how Jones has destroyed over the past two years. However, I think this fight will be a lot closer than the odds indicate. Let’s not forget that Jones is coming off a gruesome injury from his last fight in which his big toe was basically broken in half. Was that injury something that hindered his training at all during this fight? Also, Gustafsson has the size to match Jones and will not have to overcome such a huge reach disadvantage like most of Jones opponents. If Jones doesn’t use his wrestling I could certainly see Gustafsson taking a decision in this fight because he moves well on his feet and is a volume striker. However, if Jones decides to take Gustafsson down to the mat, it’s all but over as nasty ground and pound will be inflicted.

What are the chances of Eddie Wineland beating Renan Barao on Saturday night?

I saw where Wineland was over +400 as the betting underdog in this fight. I would make a small play on him with those odds. He is a huge bantamweight with good striking, and a good chin. The only liability would be his submission defense if the fight goes to the ground as the majority of his losses have come via submission. However, Barao would have to be able to get him there first and I’m not sure he can do that and keep him there. I think Wineland’s pressure style and ability to absorb punishment could make this an interesting fight for sure.

Will Costa Philippou regain the momentum he had after his last outing and assert himself back into the middleweight contention?

Philippou was riding a five fight winning streak before being sidelined with an injury. He defeated Tim Boetsch in his last outing and had earned the right to face highly ranked Ronaldo “Jacare” Souza in July, but had to pull out of the bout with the injury. He’ll be looking to get back on track with a win over Francis Carmont on Saturday night. Carmont isn’t ranked but did have some considerable hype as a prospect. He has also won five consecutive fights in the UFC and will be looking to enter the middleweight rankings. However, a win for Philippou puts him right back in the mix with the big dogs of the division.

Can Pat Healy overcome the shadow of the positive marijuana test that tainted his huge win over Jim Miller in his last outing?

Healy’s huge win in his return to the UFC in April was overshadowed by his positive marijuana test result that became public after the fight. He had won “Fight of the Night” and “Submission of the Night” honors in the win, but it was all taken away as a result of the drug test. He’ll be taking on Khabib Nurmagomedov on Saturday night who has a bit of hype surrounding with due to his impressive performances in the UFC thus far. Healy was a couple of wins away from a title shot after the win over Miller and a win over Nurmagomedov will put him right back in the hunt in one of the deepest divisions in MMA.

One thought on “Top five questions going into UFC 165: Jones vs. Gustafsson”