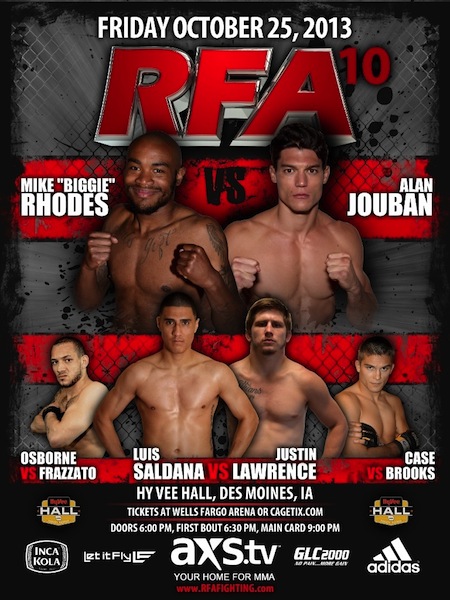 Live from Hy-Vee Hall – Tickets On Sale Now through CageTix.com

LAS VEGAS, NV – Resurrection Fighting Alliance (RFA) today announced that its 10th event will take place in the Hawkeye State and will feature the first-ever RFA welterweight title fight pitting two of the sport’s most exciting young strikers, Mike “Biggie” Rhodes and Alan Jouban, against each other for the belt. Rhodes (5-1) and Alan Jouban (7-1) are both coming off of stunning TKO victories in the RFA Octagon this summer and will ride that momentum into their high-stakes title fight at Hy-Vee Hall in downtown Des Moines, Iowa on Friday, October 25. RFA 10 will air live nationwide on AXS TV starting at 10:00 p.m. ET.

“Mike Rhodes and Alan Jouban are both coming off of huge knock out wins in the RFA. They are the types of fighters that embody what the RFA is all about. They are always looking for the finish and have the fans on their feet the entire time,” said Ed Soares, RFA President. “Two things are guaranteed on October 25th: Both of these guys will be looking for the big KO and the RFA belt will be going around the waist of a talented new champion.”

Tickets for RFA 10 – Rhodes vs. Jouban are on sale NOW through www.CageTix.com, the Hy-Vee Hall Box Office in downtown Des Moines, or through www.IowaEventsCenter.com. Tickets are $25.00 for General Admission and $35.00 for Floor Seats. VIP Tables that accommodate 10 people are also available.

Rhodes is coming off of a 56-second demolition of the tough-as-nails Benjamin Smith at RFA 8 in June. Rhodes is a student of Duke Roufus at the famed Roufusport academy in Milwaukee, Wisconsin, which is where Rhodes won his last bout against Smith. Rhodes is now returning to his home state of Iowa to add more hardware to the Roufusport trophy case, after seeing his teammates Sergio Pettis and Anthony Pettis win the RFA flyweight title and UFC lightweight title respectively over the summer.

Rhodes shared his thoughts about his upcoming title fight.

“First and foremost, it’s going to be great fighting back in my home state of Iowa. I’m excited to see how many people will come out and be in attendance to watch this nationally televised RFA title fight,” said Rhodes. “It’s a privilege to be fighting for the inaugural RFA welterweight belt against a really tough opponent. Yeah Alan Jouban is a male model and a pretty boy, but he’s also a pretty good fighter. It will be an entertaining fight, but it will end with Ed Soares giving me that gold on October 25th.”

Standing in the way of Rhodes’ triumphant homecoming in October is Alan Jouban, who is also coming off of a strong TKO win in the RFA. Last month at RFA 9, Jouban showed amazing resilience and determination in his bout against UFC and Strikeforce veteran Chris Spang. The talented Swedish striker came out swinging and Jouban never backed down. He fought fire with fire in what many MMA pundits consider one of the most exciting RFA fights to date. Jouban eventually outlasted Spang and finished him with a relentless onslaught of punches, elbows, and knees against the cage in the third round. Jouban’s adopted home crowd in Los Angeles was ecstatic with his victory and he will now look for a repeat performance as he enters enemy territory looking for gold at RFA 10.

“As soon as I was in talks with the RFA about signing, getting the strap was the first thing on my mind,” said Jouban. “I was already following the RFA and saw what a great job they were doing developing fighters. Getting to fight Chris Spang in my first fight was a great opportunity and gave me the respect I was looking for,” Jouban explained. “As far as Mike Rhodes, he seems like a funny guy and I’m sure we will be cool after the fight, but once we step inside the RFA Octagon it will be all business. Stylistically, it’s a great fight for the fans between two strikers who like to bang, but I plan on knocking out Mike Rhodes and securing my future.”

This fight has everything on paper to be one of the most explosive title fights of the year, but it’s also a fight both men wanted and have been eyeing for quite some time now. Immediately after Rhodes’ win in June that made news on ESPN SportsNation, he called out the winner of Jouban vs. Spang. Both men work as professional male models when they aren’t busy with their MMA careers and Rhodes was quick to make light of that fact on Twitter. Rhodes dubbed it a “walk-off between Zoolander and Hansel” in reference to the 2001 hit comedy Zoolander featuring competitive male models.

Despite being deep in training camp, Jouban noticed the jokes Rhodes made on Twitter and wasn’t shy about responding to Rhodes in an interview with MMAWeekly.com shortly before his fight with Spang. He stated, “There’s another guy in the RFA named Mike “Biggie” Rhodes who called us out, so that could that could be my next fight.” Jouban’s impressive performance at RFA 9 has now made that thought a reality, as Rhodes and Jouban are now headed on a collision course for the RFA welterweight title on October 25th.

The entire main card of RFA 10 – Rhodes vs. Jouban will be televised live on AXS TV starting at 10:00 p.m. ET / 7:00 p.m. PT on Friday, October 25th. RFA 10 will be the promotion’s first event in Iowa and will mark the seventh state the RFA has visited. More fights for RFA 10 will be announced soon. Please visit RFAfighting.com for bout updates and information. RFA is also on Facebook at Facebook.com/RFAfighting and Twitter at @RFAfighting.