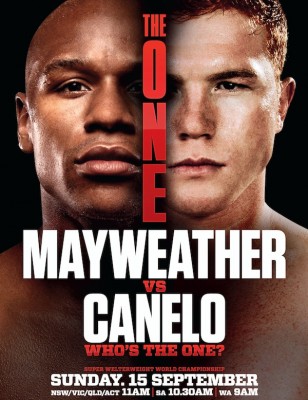 Floyd Mayweather (44-0) and Saul “El Canelo” Alvarez (42-0-1) put their undefeated records on the line this evening at the MGM Grand in Las Vegas in a 152-pound catchweight bout for Canelo’s WBC and Ring Light Middleweight Titles. The WBA Super Light Middleweight Title is also on the line. Someone’s “0” has got to go and ProMMAnow.com will bring you the round-by-round, blow-by-blow commentary on all the action. Stick with us for what is sure to be one of THE biggest boxing matches of 2013.

Round 5: Nice couple left hooks from Floyd. Left hook from Canelo. Floyd’s back to the cage. Canelo lands a few jabs of his own in return plus a big one two the backs Floyd up. Big left hook from Floyd. Big body combo from Floyd. His speed is remarkable.

Round 6: Floyd circling with jabs. Canelo comes in with power. Big left hook, again. Floyd fires off the jab, big right. Uppercut from Canelo. Neither guy afraid to trade. Nice right to body, left hook to the face from Floyd. Canelo gives Floyd a shoulder bump on a break. Floyd doesn’t like it. Ref wants it clean. Floyd fires off some nice jabs. Canelo with a one two. Big right from Floyd. Uppercut from Canelo. His speed is making the difference in this round, landing punches faster and making Canelo miss. PMN sees it 10-9 for Floyd.

Round 10: Left hook from Canelo, double jab follows. Left jab from Floyd. Canelo with a couple nice left hands. Right to body from Floyd. Canelo fires back. Floyd snapping the left jab and finding a home on Canelo’s chin. Canelo against the ropes. Nice right lands. Right to body from Canelo. Floyd against the ropes. Canelo with a right then a big body combo. Floyd gets out of there and returns to the center. Toe to toe. Floyd with the jab, combos and speed, Canelo the bigger man with power can’t seem to keep up. PMN has it 10-9 Floyd.

Round 11: Left right to body from Canelo. Big right to the body from Canelo as Floyd tries to retreat. Left jab from Canelo. Big right from Floyd. Jab, jab, nice left hook, jab from Floyd, another jab. His speed and combos are beautiful. One handed combos even. Snapping jab finds its target. Canelo goes for the body with his own combinations. Floyd gets away from the ropes. Canelo trying to cut him off. Snapping jab from Floyd, he’s almost toying with Canelo here. PMN has it 10-9 Floyd.

Round 12: Left jab from Floyd. Right from Canelo. Interesting Canelo’s corner had no sense of urgency between rounds. He needs a KO in my opinion. Floyd with the jab. He circles the ring. Quick left jab, left hook from Floyd. His footwork and speed leaves Canelo hitting air. Brief clinch and Canelo unloads some short punishment. Toe to toe now. Right hook from Canello. Jab from Floyd. Floyd dances out the last 10 seconds. Keep in mind Canelo is ONLY 23 years old. Floyd is 36. Canelo didn’t do bad. Floyd is just that good. PMN sees it 10-9 for Floyd. Great experience for Canelo.