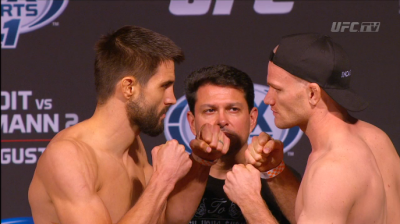 The UFC Fight Night 27 event will take place tonight on FOX Sports 1 and will be headlined by the welterweight bout between former interim welterweight champion Carlos Condit and the always tough Martin Kampmann. Both fighters are coming off losses to Johny Hendricks and need a win to stay near the top of the welterweight division. Let’s break the fight down to see who will come out the victor.

Condit (28-7) has lost back-to-back fights, including fights against champion Georges St. Pierre and the aforementioned Johny Hendricks. Condit had rattled off five consecutive victories prior to the two losses. Condit is rangy with a vast array of punches and kicks at his disposal, while also being well versed on the ground with 13 submission wins to his credit. Incredibly, Condit also has 13 wins via TKO/KO and has only gone to a decision six times in 35 career fights.

Kampmann (20-6) is coming off the loss to Hendricks in which he was knocked out with one punch. Kampmann had won three consecutive fights prior to the loss, including come from behind wins over Thiago Alves and Jake Ellenberger. Kampmann is usually a slow starter, but is well versed in both striking and on the ground. He’s incredibly durable with 15 of his 20 career wins coming via stoppage.

These two fighters fought back in 2009 which was Condit’s UFC debut after shifting from the now defunct WEC promotion. It was a razor close fight with Kampmann getting the nod from the judges via split decision. I actually thought Condit should have gotten the nod as he decisively landed more significant strikes and as well as three of four takedowns. However, Kampmann was able to land all five of his takedown attempts while landing two percent more of his strikes.

The difference in this rematch will come down the fighter’s paths since their last fight. Condit has improved his overall skill set moreso and fought stiffer competition over the past few years. Kampmann has gone (5-4) since that fight and been knocked out twice in those two losses. Condit has gone (5-2) since the Kampmann fight with the two losses both being close decision losses. Kampmann has taken way more damage than Condit over the years, couple that with him being a slow starter and that’s a recipe for another loss when fighting someone like Condit who’s steadily improved over the years.

Most notably, Condit has been able to shore up his suspect takedown defense since the last bout with Kampmann. I don’t expect Kampmann to be able to take Condit down and keep him there for long periods of time this go round. Kampmann has been hurt in the last four fights that he has had, with the damage toll finally catching up with him in the Hendricks fight.

I picture Condit getting the better of the exchanges on the feet as he did in the first encounter, and I wouldn’t be surprised to see Condit finish Kampmann via TKO/KO.