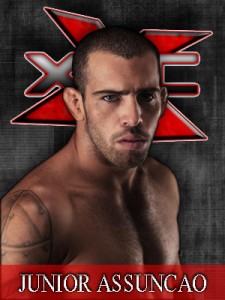 In 2010, Assuncao, a black belt in Brazilian Jiu-Jitsu and Black Rope in Capoeira, defeated John Mahlow to capture the XFC Lightweight Championship.  Before being able to defend his new title, Assuncao was offered the opportunity to return to the UFC, so with the blessing of XFC President John Prisco, Junior was let out of his contract and he respectfully vacated his belt.

Assuncao went 1-1 during his second run with the UFC, but was abruptly dismissed after his unanimous decision loss to Ross Pearson.  The company cited “an over crowded weight class” as the reason for his termination.  Junior took some time off following his release but is now refreshed , healthy, and ready to compete again.

Junior Assuncao (13-5)  has been fighting professionally since 2004.  A true veteran of the sport, Assuncao has spent time in the most recognizable organizations in the industry. He has been successful in the UFC, XFC, Shine and King of the Cage.  Before his loss to Pearson, Junior enjoyed a seven fight/three year win streak.  Assuncao holds seven wins by way of submission, two by knockout, and 4 by decision.

XFC President and Match Maker John Prisco had this to say about the Assuncao signing: “We are very excited to be able to welcome Junior back into the XFC.  Though he was only here for a short time before, I have always thought of him as a part of the XFC family; he was that pleasant to work with.  Even after Junior left us, I still kept communication open and a good working relationship with his team, not only to keep the door open for a possible return, but because I am sincerely a fan of his.  Junior is walking into an exciting time here at the XFC.  Our Featherweight “Tournament” will be held in September and October, and we will be crowning a champion shortly after.  Junior will, without a doubt, be right in the mix and waiting for whoever comes out of that tournament with the belt.  I also wouldn’t be surprised if he makes an appearance at Lightweight either.  He held our belt at that weight class before, so I can’t completely close the door on a possible return to that division. We will just have to wait and see.”