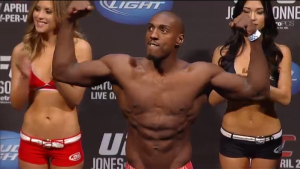 The UFC 163 co-main event featured a light heavyweight bout between former champion Lyoto Machida and young contender Phil Davis. Machida came into the bout as a sizable betting favorite with most thinking his striking and takedown defense would be too much for Davis to handle.

Davis was awarded a unanimous decision win by the judges to the dismay of fans in the audience as well as fans chatting online. The general consensus was that Machida had been ‘robbed’ of a certain win. However, I’ll point out why that wasn’t the case on Saturday night with three simple reasons: 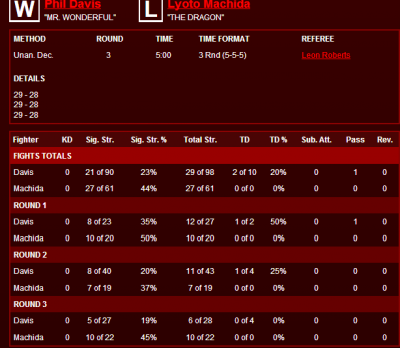 As you can see from the Fightmetric stats above, the fight was extremely close from a strikes landed point of view. I think everyone can agree that Machida won the third and final round, which takes us to the first two rounds of the fight. You’ll see that Davis landed two more strikes overall, but Machida landed two more significant strikes with Davis able to get a late takedown in the round and landed some strikes as the bell sounded. That round is basically a toss up and could have arguably gone to either fighter.

The second round saw Davis land more strikes overall, and landed one more significant strike while also getting a late takedown in the round. I clearly thought Davis had won this round while watching live. He was the more active fighter, pushed the pace while going for takedowns and attempting way more strikes.

Some people are arguing that Davis did nothing after getting the two takedowns. He actually landed strikes after each takedown, but it’s not like Machida did a ton of things offensively while the fight was standing. I thought Davis exhibited a little more octagon control since he was the attacker most of the time while Machida was waiting to counter.

I also thought Brian Stann’s commentary on the fight had some influence on how some folk viewed the fight. Stann did a very good job for most of the night, but listening to him during this bout  in particular,you would have thought Machida was dominating Phil Davis. You can see that’s not the case when you really take a look at the number of strikes landed from Machida.

I should also point out that Phil Davis defeated Brian Stann at UFC 109, dominating him over three rounds to take a unanimous decision win. It was Stann’s first time doing play-by-play that I recall, and I don’t think he’s the type of guy to allow a past fight to influence how he calls a fight. I remember tweeting that he was overly biased towards Machida about halfway through the bout on Saturday night.

I thought it was a close competitive fight that could have gone either way. It certainly wasn’t a ‘robbery’ of any kind, and there is a case to be made that the judges got it right with awarding Phil Davis the unanimous decision win over Machida.