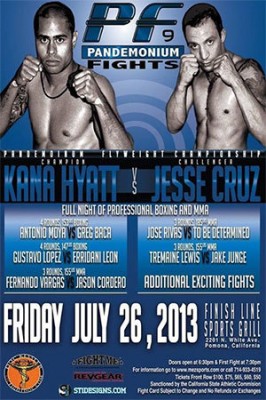 Both events will stream LIVE and FREE on the ProMMAnow.com (www.prommanow.com) homepage starting at 7:30 p.m. PT (local California time) /10:30 p.m. ET on Friday and Saturday.

Pandemonium 9 on Friday is headlined with a Flyweight Title bout between current champion Kana Hyatt (11-12) and challenger Jesse Cruz (8-3). A new and improved Hyatt, now training under the tutelage of Antonio McKee at Bodyshop Fitness, won Pandemonium’s 125-pound title back in March with an impressive third round submission finish of highly-touted up-and-comer and previously undefeated Steve Swanson (10-1) (Cub’s brother) at Pandemonium 8. 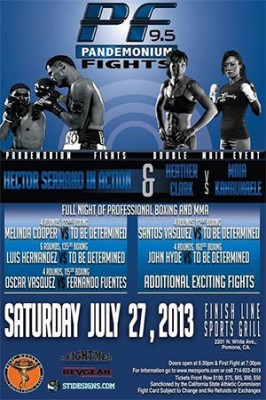 Saturday’s Pandemonium 9.5 card is primarily a boxing card, with one MMA fight mixed in. However, women’s MMA fans will recognize the name Heather Clark, who will be taking on Maia Kahaunaele in a scheduled six-round boxing match in the night’s co-headliner.