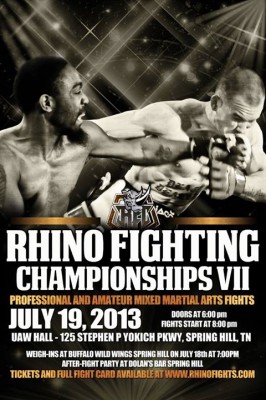 Sanders, 27, is Nashville’s hottest up-and-comer at the moment, having finished all four of his opponents in the first round since turning pro in 2011. He will have to shake off a bit of ring rust though as he hasn’t fought since June 2012 when he scored a first round TKO win over Zach Sanders (4-2) at XFC 18.

Javon Wright is taking the bout on short notice after Sanders’ original opponent was forced to withdraw. While White does have a couple of blemishes on his record, he has been quite a bit more active than Sanders during his career.

Wright had 19 amateur bouts between 2010-2011, went 16-3 and collected a handful of titles. The 22-year-old Buckeye has fought six times since turning pro last year and was last inside the cage in May when he scored a third round TKO win over Ramon Barber (7-5) at Rumble Time Promotions.

In the night’s bantamweight co-main event, Nashville MMA’s Kenny Degenhardt (2-0) returns to the Rhino Fights cage to take on John Akers (0-1), who fights out of Walker MMA in Cincinnati, Ohio. Degenhardt will look to extend his unbeaten streak as a pro after submitting Thomas Benson (0-1) at Rhino Fights 5 one year ago. Degenhardt’s other win as a pro was via unanimous decision over Andrew Osborne (6-5) at Gameness Fighting Championships 9 in April 2011.

Akers has only one pro fight on his record, dropping a first round submission to Brandon Walker (4-4) back in 2009. Now, what is odd is Akers’ record lists him going 1-5 as an amateur, however five of those fights took place between 2010-2011 AFTER his pro debut. Whatever that means, I have no idea, but that’s how it reads.

ProMMAnow.com (www.prommanow.com) will be on the scene in Spring Hill for this card. If you see us, say what’s up and ask for  Pro MMA Now sticker and we’ll hook you up. We may even have a T-Shirt or two to give away. For ticket info and to learn more about Rhino Fighting Championships visit www.rhinofights.com.
[ads2]