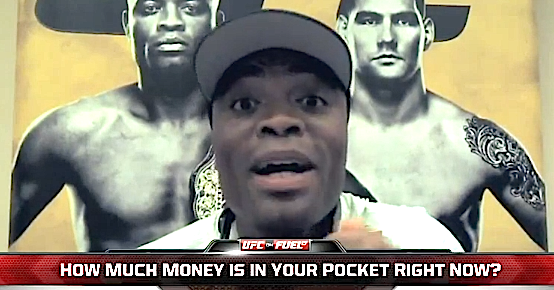 UFC middleweight champion Anderson “The Spider” Silva was a guest Tuesday on UFC Tonight with hosts Kenny Florian and Chael Sonnen. Watch as “The Spider” explains what all that talk was about with him saying he couldn’t beat Jon Jones. The champ also responds to questions about fighting Chris Weidman this weekend at UFC 162, if he has a desire to fight for the light heavyweight title, and how he feels about the idea of Chael bringing along Georges St-Pierre along for a barbecue at his house. Chael also wants to know just how much money Anderson has in his picket right at that moment and if he would fight him one more time. It’s interesting to see the two interact under these different circumstances and Anderson handles it like a pro — and in English.