To preview the upcoming Fall collection, Roots of Fight and RVCA are pre-releasing “The Prodigy Tee,” commemorating Penn’s historic win in the black-belt division of the World Jiu-Jitsu Championship in 2000.

“We have always seen RVCA as a complementary brand to ours. We share a similar love and respect for the icons of sports, as well as a similar viewpoint on design, quality, and aesthetic.” says Jesse Katz, Founder, Roots of Fight. “We complement each other so well; this collection is going to be unique and very cool.”

On Sunday, July 7th, Penn will be on hand to meet and greet his fans at the world famous Las Vegas Fight Shop from 2:30 – 4:30 PM PT. The signing is open to the public and fans are encouraged to come early, as there are a limited number of T-shirts available. 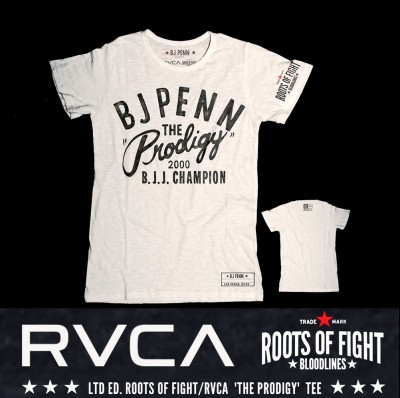 To accompany the capsule collection, Roots of Fight will be releasing a short film featuring rare footage highlighting Penn’s achievements, with commentary from BJJ standouts the Mendes Brothers, UFC Heavyweight titlist Bas ‘El Guapo’ Rutten and a number of surprise interviews with “friends” from the fight world.

A teaser for the short film can be found below:

The short film and complete Roots of Fight x RVCA collection of BJ Penn apparel will be available in Fall 2013, at Nordstrom’s, The Buckle, Tilly’s, on-line at rootsoffight.com,RVCA.com and wherever Roots of Fight and RVCA are sold.

About Roots of Fight

Roots Of Fight pays tribute to the rich history and tradition of martial arts from regions around the globe and connects the history and images of iconic fighters like Muhammad Ali® Bruce Lee™ Helio Gracie and Mike Tyson with the contemporary global scale of mixed martial arts. Roots Of Fight tells an authentic story that reflects a genuine place and time and weaves the true stories of icons from the past with those of the present – paying homage to the roots, regional influence and diversity of each discipline. The “Sweet Science”, “Jun Fan Gung Fu”, “Gracie Jiu Jitsu”, “Jeet Kune Do” along with “Muay Thai” and Krav Maga – legends about these fighting systems and others are explored by Roots Of Fight.
About RVCA
RVCA is the brainchild of company Founder and President, PM Tenore. Transcending the boundaries of traditional action sports apparel, RVCA is a design-driven lifestyle brand free from passing trends. Appearing as a natural on the shelves of boutiques as on those of a local skate shop, RVCA is brought together by a group of like-minded individuals from various subcultures, a collaboration of sorts, a lifestyle within itself.PM Tenore’s intention from the very beginning has been to create a platform for RVCA, which combines art, music, fashion and a modern lifestyle in an original way. At the forefront of this vision has been RVCA’s Artist Network Program (ANP)-a venture established to showcase the talents of accomplished as well as unknown artists who inspire our generation and push the boundaries of creative excellence.Established to promote the genuine integrity of RVCA’s subcultures while simultaneously giving back to the community, RVCA in essence is redefining the way the market views art and fashion as represented through the balance of opposites and how they coexist: water, oil; air, land; destruction, industrialization; art, science; foreign, domestic; order, chaos; past, present.

For RVCA, it is about today, tomorrow and life as the big picture. It is about inspiring our generation, providing something of substance and culture and above all doing it with integrity and as a united family, a close-knit community.