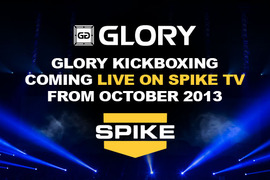 Starting this October GLORY Sports International kickboxing will be broadcast live on Spike TV. According to an official press release by GLORY, the promotion will begin broadcasting two hour events on Saturday nights.

Spike TV has been no stranger to the combat sports game. The cable network, which formerly broadcast Zuffa’s The Ultimate Fighter, is already home to Bellator’s MMA programming, and the addition of GLORY kickboxing only further cements Spike’s position as a frontrunner in fight-sport broadcasting.

The full press release can be found below:

GLORY Kickboxing Program to Debut In Primetime LIVE On Spike In Fall, 2013

“We are thrilled to partner with GSI in bringing Spike TV’s audience the incredible action and intensity of GLORY’s fight league, which feature the best kickboxers in the world,” said Slusser. “Viewers will quickly see this as the perfect complement to our coverage of Bellator, the world’s leading tournament-based MMA promotion.”

“Spike has established itself as the home of combat sports in a way that is unique. Its audience will expect the most exciting ring action and we promise to deliver it,” said Whitaker. “Glory kickboxing is the next big thing and Spike clearly knows something about spotting aces in the sports programming space.”

Spike TV has a long tradition of telecasting the best in action sports, and is currently the home of the emerging mixed martial arts league, Bellator MMA.