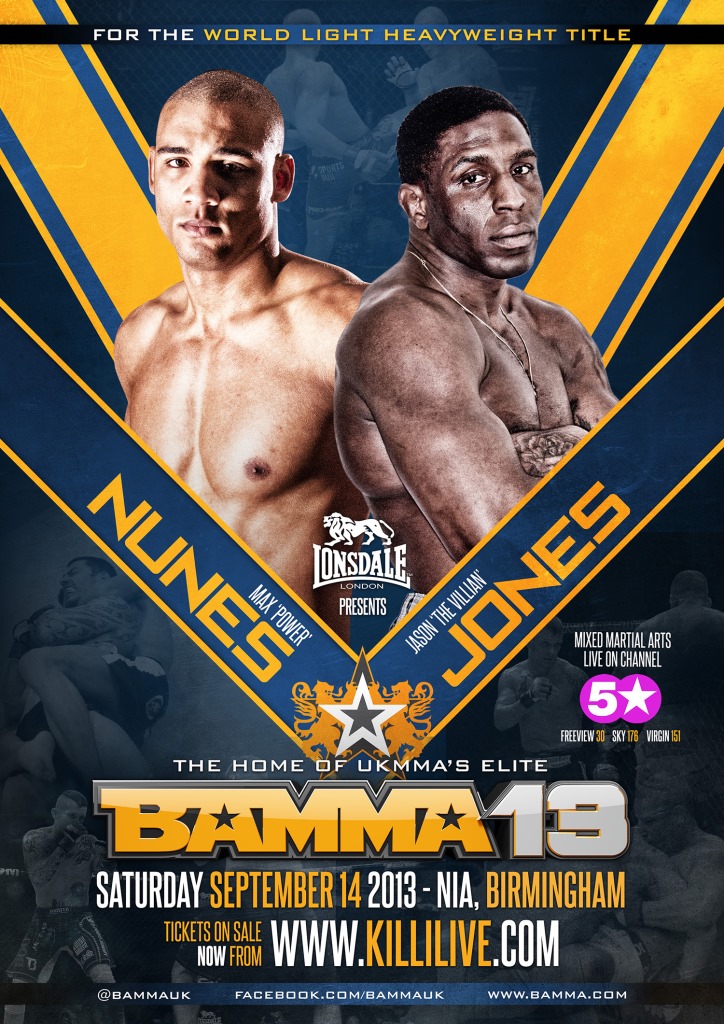 The UK’s Premier Mixed Martial Arts promotion, BAMMA is back on 14th September to bring another stunning night of fights to Birmingham’s National Indoor Arena with BAMMA 13. Tickets are on sale now from £25 at http://bit.ly/1bUZXbR

Brutal athlete, Jason “The Villain” Jones, hails from Holland with a record of 19-10-0.  Debuting in 2004, the Judo black belt carved his reputation across promotions that included M-1 Global, Shooto, K-1, King of the Cage, Deep and United Glory.  Jones first entered the BAMMA cage at BAMMA 9 where he terrorised Przemyslaw Mysiala, stopping him with cuts in the first round.  Lauded London based Swede, Max “Power” Nunes, remains undefeated with an MMA record of 10-0-0.  Demolishing Kevin Thompson via TKO at 1:40 into round 1 at BAMMA 11, Nunes achieved the 8th 1st round finish of his career and made waves internationally. He went on to face unorthodox Marcin Lazarz at BAMMA 12, in a tricky bout that was his first to stretch to the third round. This mouth-watering tear-up is the one that fans have been waiting for.

Leicester’s “ Judo” Jimmy Wallhead (24-7-0) stands among the elite of UK Middleweights and Welterweights, but was often snubbed in his career because of his fierce talent. This included being knocked back when he applied for “The Ultimate Fighter: United States vs. United Kingdom” in 2008 on the grounds of being ‘too experienced’. Wallhead’s victory over the legendary Frank Trigg at BAMMA 7 finally put his star on the map; while his demolition of Villasenor at BAMMA 8 with flying knees and a spectacular KO remains unforgettable.  Wallhead signed up to an exclusive UK multi-fight deal with BAMMA earlier this year and went on to defeat former UFC contender Matt Veach at BAMMA 12 in a typically explosive performance. “Fast” Eddy  Ellis hails from Washington, USA with a record of 18 wins and 15 losses. The veteran is on a six fight win streak and has lost just one bout in his last ten. With 13 years of professional MMA fights under his belt, Ellis has scored victories in promotions such as Strikeforce, King of the Cage, IFC, WEC and Sportfight; and has 15 championship belts to his name.  Ellis is a veteran of The Ultimate Fighter, Season 16 on which he represented Team Carwin.  He is current head coach at United Training Centre in Washington.

“Jones versus Nunes, and Wallhead versus Ellis kick the BAMMA 13 card off to a sharp start and give a flavour of what can be expected from the rest of the night. BAMMA 13 has been some time in the works and we promise another exciting and entertaining night of fights. BAMMA 14 is also in motion for later in the year and following renewed broadcast conversations we can assure fans of a stable events schedule running into 2014. We’d like to thank BAMMA fans for their support.”

BAMMA 13 will feature live on 5* with highlights on Channel 5 in the UK;  and will be televised on AXS-TV in the US, The Fight Network in Canada, Red Media in Russia, TV Esporte Interativo in Brazil and Setanta in Africa.