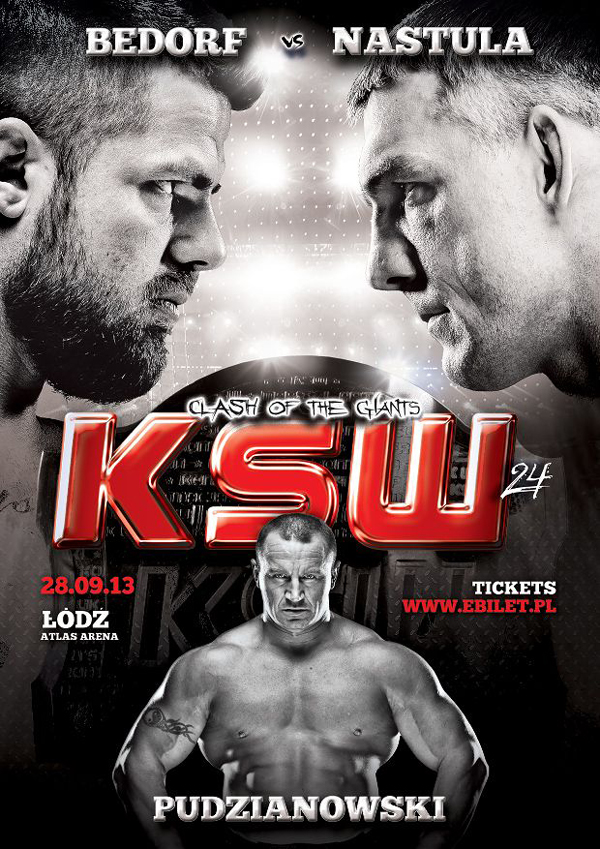 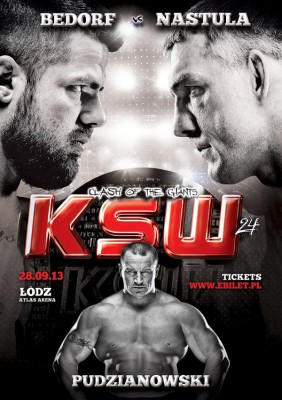 The 28th of September 2013 is the freshly announced date of spectacular KSW24 – Clash of the Giants event. After more than one year KSW Federation returns the second biggest indoor venue in Poland Łódź’s Atlas Arena.

The two headlining fights will feature the giants of the Polish heavyweight division. Judo Olympic champion Paweł Nastula will square off against one the best fighters in Poland Karol Bedorf in the clash for the inaugural KSW heavyweight title. In the co-main event former five-time World’s Strongest Man Mariusz Pudzianowski will have his tenth MMA bout against yet to be named foe.

However, it is not the end of heavy bouts on star-studded KSW 24 fight card. After year-long hiatus the “Płock’s Barbarian” Marcin Różalski will return to the famous white KSW ring. The name of his opponent is unknown at the moment, but the presence of the popular muay thai stylist guarantees a ferocious fight. Also, the former KSW Amateur Cup winner Kamil Waluś will face British strongman Oli Thompson.

To heat up the excitement of the MMA enthusiast even more, the show’s main card will also feature the number two ranked welterweight in Poland Borys Mańkowski and the best featherweight Anzor Azhiev. Their opponents as well as the seventh bout will be announced at the later date.

Starting from KSW24 – Clash of the Giants the KSW events will have additional undercard bouts. In SeptemberRobert Radomski from Silesian Cage Club Katowice will battle Rafał Błachuta in the welterweight contest, while lightweight Jakub Kowalewicz from PJ Promotion Group awaits the name of his rival.

Just like KSW23, the next show will also air on Pay Per View. The tickets for the event will be available from May 27th on www.ebilet.pl.