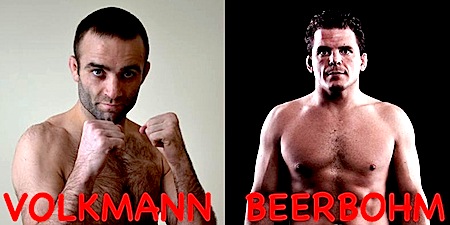 A wrist sprain has forced Rolles Gracie out of his heavyweight bout with Dave Huckaba at WSOF 3. The bout was scheduled as part of World Series of Fighting’s main card to be televised live on NBC Sports Network from the Hard Rock Hotel & Casino in Las Vegas on Friday, June 14.

Moving up from the prelims and taking their spot on the televised main card will be a lightweight match-up between grappling specialists Lyle “Fancy Pants” Beerbohm (21-2) and Jacob Volkmann (15-4).

“We wish Rolles Gracie a full and speedy recovery and expect to see him make his debut for World Series of Fighting soon. Both Lyle Beerbohm and Jacob Volkmann are no strangers to the big stage, having fought at a world-class level in front of national audiences for years, so we are looking forward to showcasing this fantastic matchup between two lightweight stars of our sport before our NBC Sports Network audience.”

Beerbohm (22-2) is a 34-year-old Strikeforce veteran from Spokane, Wash. A former meth addict who discovered MMA while watching TV from a prison sofa, Beerbohm enrolled in MMA classes the day he was released from prison.

Beerbohm made his pro MMA debut in 2007 and racked up 15 straight wins before dropping a decision to Pat Healy at Strikeforce Challengers in Feb. 2011. Beerbohm returned to Strikeforce two months later and was submitted by Japanese superstar Shinya Aoki. Beerbohm has not lost a fight since and is currently riding a six-fight win streak.

“Fancy Pants” has already fought twice in 2013, scoring a second round TKO win over Chris Ensley and a second round submission win over Justin Larsson inside the Northwest Fighting cage.

Volkmann (15-4) may be most known as the former UFC fighter who got a visit from the Secret Service after he made some disparaging comments about President Obama in one of his post-fight interviews.

The 32-year-old, three-time NCAA Division I All-American and former Big 10 Conference wrestling champion for University of Minnesota, has been fighting professionally since 2007, earning 7 of his 15 career victories by way of submission.

Volkmann, who went 6-4 during his 10-fight four-year stint in the UFC, was released from the promotion earlier this year after dropping a third round submission to Bobby Green at UFC 156 back in February.

WSOF 3 is headlined with a welterweight rematch between former UFC title contender Jon Fitch (24-5) and fellow UFC veteran Josh Burkman (25-9). Burkman, who is 2-0 inside the WSOF cage, suffered a second round submission loss to Fitch in the UFC back in 2006 and will be looking for redemption.