Photo of the Day: UFC on FOX Sports 1:1 poster with Jones vs. Gustafsson, Shogun vs. Sonnen and Overeem vs. Browne 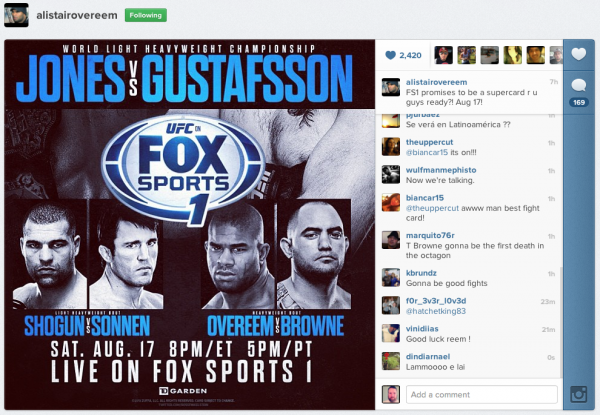 UFC heavyweight Alistair Overeem posted an interesting photo on his Instagram (@AlistairOvereem) today. It shows a fight poster for the UFC on FOX SPORTS 1:1 card with Jon Jones vs. Alexander Gustafsson as the headliner, Mauricio “Shogun” Rua vs. Chael Sonnen and Alistair Overeem vs. Travis Browne all slated for the Aug. 17 event in Boston.

Now, the only one of these three fights that have been confirmed thus far is Overeem vs. Browne. Of course the whole Shogun-Sonnen thing happened yesterday and Jones has been nursing that toe injury and a return date for him had not yet been officially set.

This could very well just be a fan-made poster and Overeem could just be trolling us. On the other hand, remember we did tell you earlier today that Sonnen has a “surprising update” for us this evening on UFC Tonight — could this be it?

Aside from possible addition of Jones-Gustafsson and Sonnen-Rua, the UFC on FOX Sports 1:1 full card line-up as it currently stands looks like this: