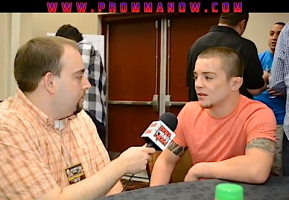 UFC officials have announced two more fights for the upcoming UFC on FOX Sports 1 event that’s set for August 17 at the TD Garden in Boston.

McGregor (13-2) is coming off a victorious UFC debut where he knocked out Marcus Brimage in the first round at the UFC on FUEL TV 9 event in April.

Ogle (9-2) is coming off a unanimous decision win over Josh Grispi at the UFC on FUEL TV 7 event in February.

Brown (26-8) is coming off back-to-back wins including a unanimous decision win over Daniel Pineda at UFC 146.

Corassani (11-3-1) is also coming off back-to-back wins including a unanimous decision win over Robbie Peralta at the UFC on FUEL TV 9 event in April.

The UFC on FOX Sports 1 card thus far can be found below:

The main event is expected to be announced soon. Stay tuned to ProMMANow.com for more UFC on FOX Sports 1 news and coverage.