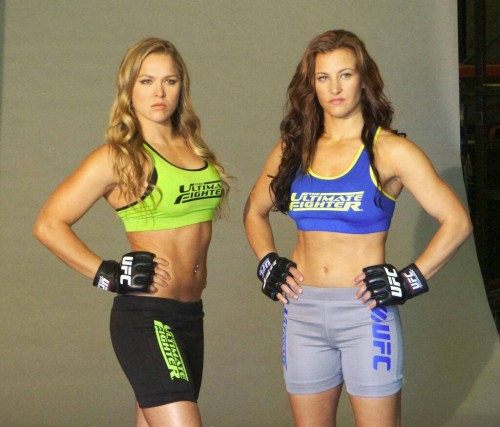 Check out the photo of Ronda Rousey and Miesha Tate rocking their new TUF 18 team colors. What do you think? Which outfit do you like better? I will say I think the colors and designs have come a LONG way over some of the earlier seasons. Remember these horrid things.

With the injury of Cat Zingano, Tate stepped in to take the coaching spot opposite her bitter rival Rousey (no, they didn’t offer the coaching spot to Sara McMann, although she said she didn’t want it anyway). The two ladies first squared off in an epic back-and-forth battle for the Strikeforce women’s bantamweight title back in March 2012. Now, not only will they be fighting once again, this time for Ronda’s UFC title, but the two will have to match wits with their coaching skills and the always enjoyable “Coaches Challenge”.

Both Rousey and Tate are highly competitive so you know there’s going to be some good drama on the show. By the way, what do you think should be the “Coaches Challenge” for these two? Hmmmm…. baking? “Cupcake” might win that one. Shooting guns? Someone might end up in prison. Badminton? Skateboarding? Let’s hear your ideas. 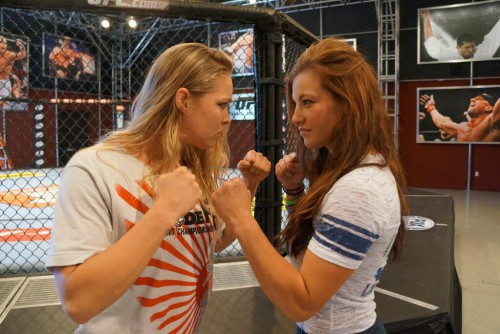 The Ultimate Fighter season 18 is currently under production in Las Vegas. The UFC reality show showcasing male and female bantamweights is scheduled to premiere on Wednesday, Sept. 4, on Fox Sports 1.