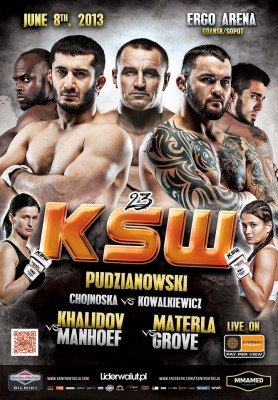 The headline bout for KSW 23 has been announced as Mamed Khalidov (26-4-2) faces Melvin Manhoef (27-10-1) in a middleweight matchup. The event will take place at the Ergo Arena in Sopot/Gdańsk, Poland, on June 8.

KSW 23 will feature a co-main event between former five-time World’s Strongest Man Mariusz Pudzianowski and UFC veteran Sean McCorkle. The two men will engage in a super heavyweight showdown, with Pudzianowski looking to extend his current winning streak to three, and McCorkle searching for a convincing victory that will put him back on the winning track.

Also on the card, Michał Materla will defend the KSW middleweight title against Kendall Grove, and Aslambek Saidov takes on Ben Lagman in a welterweight bout. The show is available live worldwide on online PPV on iplaTV and www.kswtv.com.

Mamed Khalidov is currently riding a six fight winning streak, most recently defeating Kendall Grove via second round submission at KSW 21 in December 2012. Prior to that he scored a first round KO victory over Rodney Wallace at KSW 19 in May 2012, and picked up a first round submission win over Jesse Taylor at KSW 17  in November 2011. Khalidov now has the chance to extend his streak to seven with a big win over Manhoef.

Melvin Manhoef last fought at ONE FC 8 in April, where he dropped a decision loss against Brock Larson. That loss snapped a three fight winning streak he had been on, defeating notable fighters such as Jae Young Kim, Ryo Kawamura and Denis Kang during 2012. Manhoef will no doubt look to bounce back into the win column with a good performance against Khalidov on June 8.

The full KSW 23 Fight Card is below:

One thought on “KSW 23: Event preview”