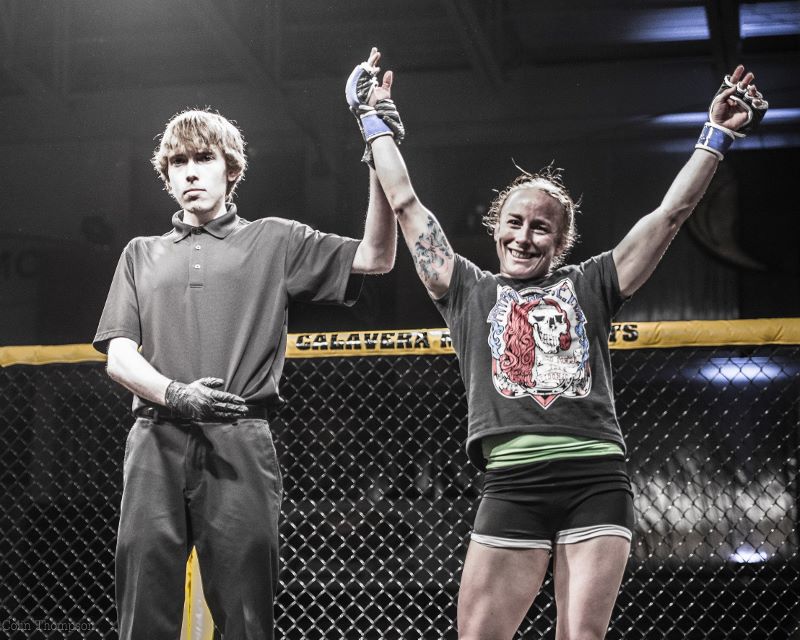 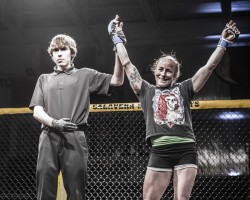 “Little” Patricia Vidonic will take her second short-notice fight in under a month when she takes on Alida Gray at “SCS 17: Mayhem” on Saturday, June 1 at Sugar Creek Casino in Hinton, Okla.

Gray, a 36-year-old Texan who went 3-1 as an amateur, is making her pro debut against Vidonic in a 115 pound title bout. Gray was originally scheduled to fight Katie Cismir, but she pulled out and the promotion was having trouble finding a replacement — a situation almost identical to Vidonic’s last fight.

Props to Gray for being willing to challenge herself against an established veteran like Vidonic (8-5). If you look at their records, Vidonic had her first amateur fight in Sept. 2009 and Gray had her first fight in Oct. 2010 — just 11 months apart. It’s just that Vidonic has been a lot more active in her career and therefore turned pro sooner.

Gray definitely doesn’t seem intimidated by Vidonic and in fact sees her as a bit of a stepping stone. When asked by ProMMAnow.com (www.prommanow.com) how she felt about making her pro debut against the veteran, Gray said:

“I’m really excited to have an opportunity to fight Patricia Vidonic. I’ve had offers to fight other ‘big’ name opponents, but for one reason or another the match ups didn’t happen. Vidonic is a replacement for Sugar Creek. I agreed to fight her because I’m tired of waiting around for fights to happen. Vidonic as my opponent is not a big deal. I see her as an amateur fighter with a pro career. You might say I’m out of my league to fight Vidonic for my pro debut. But on June 1st, Vidonic will make my name be known!! My goal right now is to get to Invicta and I see this match up as an opportunity to get there.”

It’s interesting because Vidonic was almost in the same exact situation in her first pro fight. She was originally scheduled to face an opponent of similar experience, then three days before the fight she found out she’d be fighting Valerie Coolbaugh who was 7-6 at the time and had been in the cage many of the sport’s biggest names.

Vidonic last fought on May 4, when she got the call to step in against Jessica Doerner at “Golden Cage MMA: Magic City Mayhem 2″ on seven days notice. Vidonic took the fight and walked away with the first round submission victory via armbar. Gray’s last fight was in September 2012 against Lorna Johnson and she also walked away with a first round submission win via armbar.

For more information on “SCS 17: Mayhem” and the full fight card visit www.scsfights.com and like them on Facebook.

[box type=”shadow” ]UPDATE: This is a statement we received from Sugar Creek Showdown promoter Glen Coleman regarding the Vidonic vs. Gray fight.

We realize as these girls become well known and build their records they will move on to bigger shows. It happens with our guys everyday and we shake their hands and wish them the best for the future. When Alida’s opponent became injured I tried coast to coast to find a fighter of equal stature. Patricia’s name came up early in discussions but I tried to discourage Alida’s camp from the fight and we continued to look. When it came down to crunch time to get a replacement Alida’s camp wanted the fight. Obviously her team feels they have a game plan for this fight. Can I say I like the matchup, I can’t say I do. Do I normally let such a matchup happen no but you have to look at it from the point of view of Alida’s team.

Alida’s is not without experience she has had 4 fights and years of training. Alida has everything to gain and not much to lose. It’s kind of like the Rocky story; if Alida were to win this fight she would immediately jump to a whole new level. If she loses then she loses to a more experienced fighter. I have seen worse match ups on some really big shows when you a have a 1-5 fighter fighting a 10-0 fighter. That’s not our style but we do respect the guts it takes for Alida to step in the cage with a fighter of much more experience. If you look at it from that point of view Patricia has more to lose than Alida.

We are honored to have Patricia on our card. It was always at some point we wanted to bring her in, it just happened a little sooner than planned. I have to thank Patricia for stepping up and taking a fight on such a short notice. What amounts to being about a week’s notice which in many ways my help even the scales. We have from beginning amateurs to world ranked pro fighters on the card and we are proud to give them a chance to make their dreams come true. What is the great thing about MMA? It is the fact that any fighter on any given day can beat another fighter. It can happen at the blink of an eye and it makes our sport more exciting than any other sport. The only MMA fighter who hasn’t lost a fight is the one who hasn’t had enough fights.

“As Always May the Best Fighter Win”