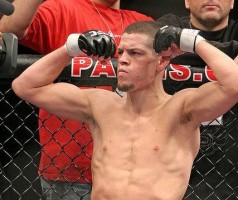 UFC lightweight Nate Diaz was already on a bit of thin ice having lost his last two fights in a row, so when he broke the UFC’s Code of Conduct this past week by calling Byan Caraway a “Fag”, UFC president Dana White said Diaz would either be fined, suspended or released by the promotion.

Fortunately for Diaz he gets to keep his job — at least for now.

“UFC lightweight Nate Diaz has received an immediate 90-day suspension and $20,000 fine for violating the UFC’s fighter code of conduct. The language used in his tweet was regrettable, offensive and inconsistent with the values and culture of the organization, and is not tolerated.”

Despite the repercussions, it didn’t stop Diaz from taking another shot at Caraway on Saturday:

Diaz’s manager, Mike Kogan, prior to the punishment being levied, said he had not advised Diaz to remove the tweet and explained why:

“Guess what? The word f—-t, at least in Northern California, and where Nate is from, means bitch. It means you’re a little punk. It has nothing to do with homosexuals at all. So when Nate made the comment that he made, he didn’t make it in reference to homosexuals or calling Caraway a homosexual. He just said it was a bitch move.”

Maybe there needs to be a Stockton dictionary. There very literally may be not one homosexual in Stockton, California. 209.

Kogan also suggested his Twitter followers read the definition of the word “Fag” in the Urban Dictionary: 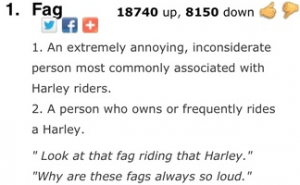 Well, Kogan is correct, that’s one of the meanings listed in the Urban Dictionary, which means that is one way the word can be taken — they lost me on the Harley reference though. But there are other meanings too, such as this No. 7: 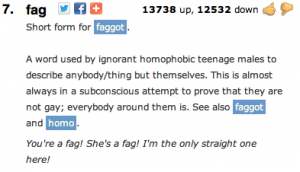 The point is there are many ways the word “fag” can be taken. It’s also slang for “cigarette”. Of course I don’t think Nate Diaz was calling Bryan Caraway a cigarette.

Anyways… Diaz’s punishment has been meted out. It’s unfortunate Caraway is a bantamweight or they could settle this inside the Octagon.

Incidentally, Diaz’s original tweet containing the gay slur has been removed from Twitter. That very well could have been a requirement by the UFC, or maybe Diaz just had a change of heart… yeah right.

So what do you think? Does the UFC’s punishment meet the “crime” or were they too hard on Diaz — or maybe you think they were too soft? Let’s hear it.
[ads2]