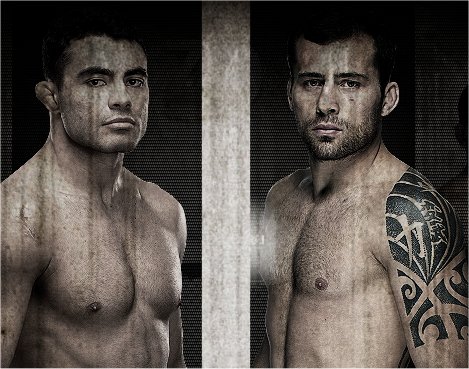 Rafael Natal overcame a fast start from UFC newcomer Joao Zeferino to take control of the bout in the second, earning a tough unanimous decision victory to kick off the live televised main card of UFC on FX 8.

Joao Zeferino got off to a blazing start, using his kicks to set up his overhand right. He landed the winging right hand on several occasions, backing up Rafael Natal as he seized control of the round. Zeferino then showed off his kicking game, landing a flush head kick that stopped Natal in his tracks. After a takedown took the action to the ground, both fighters fought for position and threatened with ankle and foot locks. Neither guy could manage to dominate the action on the mat, resulting in a stand up with under 30 seconds to go in the opening round.

Zeferino came out looking relaxed and comfortable to start the second, but after landing with more winging punches, he started to slow as Natal began to take the center of the octagon. Zeferino started looking for takedowns as he slowed down, but Natal easily defended the attempts. Zeferino managed to score with more counter punches, but after a spinning backfist missed, he flopped to his back giving up important positional control as Natal took top position and scored with punches to take the round.

Zeferino came out bouncing on his feet but was still visibly fatigued as he mostly countered to start the final round. Natal stalked his opponent across the cage before getting inside and landing with a flurry. Zeferino then started to come forward with under three minutes to go but it was mostly a one-and-done attack with his winging right hand. He then went for the takedown but it was Natal that ended up on top, dropping right hands as he looked to improve his position on the mat. Natal did just that, passing to side control while landing to the body. Natal continued to work, moving to mount and dropping big shots form the top as Zeferino tried desperately to make it to the end of the bout. The bell sounded on the bout with Natal continuing to score from his domination position.