Nate Diaz may have just got himself fired from the UFC 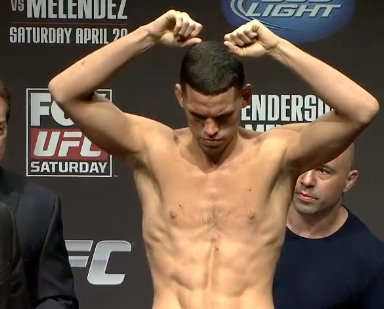 Nate Diaz did not approve of Pat Healy having his $130,000 bonus money taken away for testing positive for marijuana. And he certainly didn’t like the fact that the bonus money was awarded to pot-hater Bryan Caraway. However, Nate went a bit far in expressing his discontent with the following tweets today:

All UFC fighters know by now — or at least they should know — that sort of language will not be tolerated by their employer. It’s really that simple.

Now Nate could be facing unemployment for his decision to use the gay slur, according to MMAJunkie reporter John Morgan:

Just received this from Dana White on Nate Diaz tweet: "He will be either fined and suspended or cut for that tweet."

What are your thoughts? Should Nate Diaz be fined, suspended or fired for the slur?

UPDATE: The UFC has issued the following statement: “We are very disappointed by Nate Diaz’s comments, which are in no way reflective of our organization. Nate is currently suspended pending internal investigation and we will provide further comment once the matter has been decided,”
[ads2]